Windows Home Server: At Home in the Office 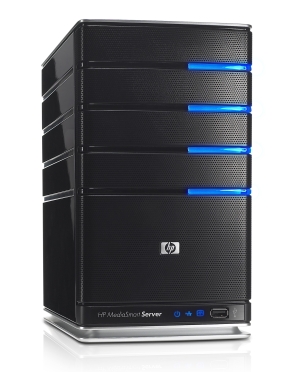 What’s in a name? In the case of Microsoft’s new Windows Home Server platform, it could be a whole lot of missed opportunities. With a name like that, the average business owner might not give such a device a second look. But call it “Centralized Storage and Automated Backup for Small Networks, with Remote Access to Files via the Web” and the relevance to your business becomes obvious.

The moniker notwithstanding, Windows Home Server deserves a look for anyone grappling with several PCs and who is tired of shuffling files around via a USB memory device. This special-purpose operating system was developed by Microsoft, and is available now in systems such as the HP MediaSmart Server and NetMagix HQ HomeServer from Velocity Micro, with more makers to follow.

Like other network-attached storage (NAS) devices, a Windows Home Server unit gives you expandable hard drive space that can be accessed by all the PCs on your network. And like a traditional NAS, you also get backup software to load on each PC, so you can make sure critical data is safe should an individual PC go down.

But Microsoft claims its operating system does even more. For example, the system backs up not just files and folders, but applications and the operating system as well, so recovering an entire hard drive image is easy. Windows Home Server also provides built-in search capabilities to help you find stored files, and the backup process is automatic (just set and forget) and smart enough to back up only the data that hasn’t been backed up before. And instead of just storing the most recent version of a file, Windows Home Server lets you restore a file or folder from a given point in time.

Data Safety Net
These backup features are what originally excited Heather and Doug Jacobson about the Windows Home Server platform. Working out of their home in Fall City, Wash., Doug and Heather each run separate businesses. In 2001, Heather started Northwest Gift Company, which provides gift baskets for corporate clients, special occasions and events. Then in 2003, Doug turned his decade-long hobby into a full-time job with Steamboat Productions, a Web-, video- and graphic-design firm.

“We have five computers between us, but we had no comprehensive backup plan,” said Heather.

With the huge file sizes of Doug’s video projects, backing up was especially cumbersome. “I have several external hard drives for backups, but those would get full, so I would have to go back through the files and decide which didn’t need to get backed up,” said Doug. He would also have to keep track of which projects were on which drives—an inefficient use of time.

In February of 2007, help arrived. Heather and Doug were tapped by Microsoft to be beta testers for the Windows Home Server project. They already had a network in place (four machines connected via Ethernet to their router, and one laptop connected via Wi-Fi), so setting up the solution was easy. Doug plugged the Windows Home Server device into a free port on the router and installed the client software on each PC. The software initiated a backup on each machine, and from then on it’s kept each machine’s back-up file up to date.

“I love the peace of mind of a daily backup,” said Heather, “and it’s already saved us on more than one occasion.”

Due to the nature of massive video-editing projects, files can be unstable. “If a project file becomes corrupted, I can lose weeks’ worth of work,” explained Doug. He recently had a file crash, but thanks to Windows Home Server’s continuous backups, he only lost about 30 minutes of work. “Not only didn’t I have to re-do all that work,” he said, “I also didn’t have to miss a deadline to my client.”

“And I didn’t have to listen to him complain,” offered Heather.

Centrally Located
Beyond backup, Windows Home Server devices also act as centralized storage for your business’ commonly accessed files. “Before, we had to remember which PC a file was on,” said Doug. “Now, we know it’s on the server.”

Windows Home Server devices are designed to be expandable, to grow as your business does. For example, HP’s MediaSmart Server comes in both 500GB and 1-terabyte versions, with available internal drive bays to add even more capacity. Velocity Micro’s NetMagix HQ accommodates up to 4 terabytes of storage.

Unlike most traditional NAS drives, Windows Home Server also allows for remote access to files stored on the device. All you need is a Windows Live Internet address and log-on (which you set up during installation of the device), and you can access your Windows Home Server from any PC with Internet access. In addition to file access, you can also access the PCs on your network as if you were sitting in front of them.

This makes a Windows Home Server device ideal if you travel frequently (no more panicking in the hotel room if you’ve forgotten a critical file) or have employees who work remotely.

Doug Jacobson has used the remote-access capability to his advantage, too. “I was at a potential client’s site, showing them my Web site work,” he recounted. The prospect asked if Doug had any experience with digital scrapbooking, since that was a direction the firm was considering. “I hadn’t brought any of those files with me, but I was able to log onto my Windows Home Server and retrieve them,” he said.

And true to its name, Windows Home Server also has potential for non-business activities. For example, you can set up a directory for your personal files (such as photos) that you want family and friends to be able to access. And if you have an Xbox 360, you can use the game console to access media files stored on a Windows Home Server, and play them back on the TV system the Xbox is attached to.

All this functionality doesn’t come cheap. The HP MediaSmart Server series street price comes in at $550 to $600 for the 500GB version and $700 to $800 for the 1TB version. Velocity Micro offers its version starting at $999. That’s pricier than a traditional NAS box, but with Windows Home Server’s automated backup, remote-access, and media-streaming abilities, you are also getting a lot more functionality. So if your business has several PCs and no defined way to back up data and share files, the Windows Home Server platform could be the answer.


Jamie Bsales is an award-winning technology writer and editor with nearly 14 years of experience covering the latest hardware, software and Internet products and services.