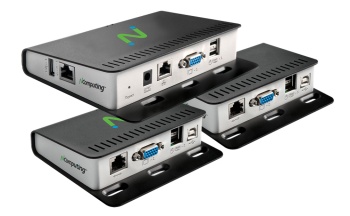 Resource-constrained small businesses often flinch when pondering the cost of new computers. After all, the outlay for each new system ultimately encompasses not only the upfront price tag of the hardware and software, but cost of deployment as well as ongoing support and maintenance.

NComputing’s M300 Virtual Desktop Kit ($549 MSRP) aims to offer small businesses a simple and cost-effective way to put computers on three employees’ desks. It does so through a combination of desktop virtualization (via Windows Remote Desktop feature) and thin client hardware rather than full-fledged PCs.

What the Virtual Desktop Kit Includes

NComputing’s M300 Virtual Desktop Kit comes with the company’s vSpace server software, which runs on Windows 2008 Server R2 SP1 or Windows Multipoint Server 2011 (we tested using the former, and Ncomputing says Linux support is due in Q2 2012). VSpace can run directly within one of the aforementioned operating systems, or from inside a virtual machine running one of them (which is how we tested it).

The M300 kit provides a trio of client hardware devices — one large, and two small. (Actually, they’re all quite small — the large unit has a miniscule 6.3- x 4.7- x 1.4-inch footprint, while the other two are tinier still.) The large device connects to the vSpace host server via Ethernet, while the two smaller devices directly connect to the larger unit with CAT 5 cable.

There’s about a 16 foot (5 meter) cable length limit between the large and small units, so while the large unit can be as far as 328 feet (100 meters) from the server (Ethernet’s standard maximum length), the three units must be in fairly close proximity. It’s worth noting only the larger unit needs to be plugged into AC power; the smaller units get their juice from the CAT 5 connection. As a result, the M300 devices collectively consume a minimal amount of power relative to a PC; NComputing says 6 watts is typical.

All three client devices offer a standard compliment of I/O ports — on the back, a pair of USB 1.1 ports for keyboard and mouse and DB-15 VGA for a monitor connection, while microphone and headphone audio outputs reside on the front. The clients also sport an additional USB 2.0 port up front to accommodate devices other than a keyboard and mouse — e.g. a Flash drive or printer (alas, webcams aren’t supported). However, to enable these ports on the small devices you need to create an additional link between the small units and the large one with standard USB A/B cables.

Virtual Desktop Setup and Use

To test the M300, we installed the vSpace software onto a Windows 2008 Server R2 SP1 virtual machine running within Citrix XenServer on a quad-core 2.9 GHz AMD Phenom II system with 16 GB of RAM, connected to the network via 100 Mbps Ethernet. The vSpace VM was configured to use four virtual CPUs and 8 GB of RAM.

Getting vSpace up and running was a straightforward wizard-based process and took only a few minutes. We spent a few more minutes ensuring that the built-in Windows Firewall allowed a handful of vSpace applications to run and permitted access to about a dozen necessary TCP and UDP ports, and that our user accounts were members of the Remote Desktop Users group so they’d be able to log into virtual desktops from the M300.

We were able to set up all the M300 client devices (which generate no noise and negligible heat since they lack fans and hard drives) in the five minutes or so it took the vSpace server to restart. (The M300 requires you to supply your own keyboard, mouse, and Ethernet and USB cables, by the way.) Upon powering up, the clients greeted us with a vSpace logon screen, but we initially found the keyboards we had connected were unresponsive.