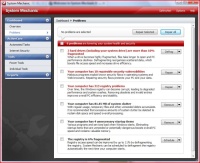 Sluggish, error-prone Windows PCs—particularly those that have been in use for a long time– are pretty much par for the course, especially in small offices that lack IT support.  System Mechanic 8.5 Business Edition from Iolo Technologies aims to breathe new life into errant PCs by scanning for and eliminating the many configuration problems and forms of detritus that tend to accumulate on systems over time and that can contribute to reduced performance and reliability.

We put the software through its paces on a pair of test systems. One was a listless XP Professional PC (Pentium 4, 512 MB of RAM) that had been chugging along for several years since an overhaul. The other, a more recent Vista Home Premium system (Core 2 Quad, 3 GB of RAM) that provided acceptable performance but was plagued by frequent Windows component crashes and almost as frequent blue screens. (System Mechanic is compatible with 32- or 64-bit XP or Vista systems or Windows Server 2003.)

Checking Under the Hood

Upon installing System Mechanic, you can choose from two types of system analysis– a “quick” scan or a “deep” one. The scans purport to take one-to-two or five –to-seven minutes, respectively, but we found those estimates a tad optimistic, particularly in the case of the deep scan, which took in excess of 15 minutes on both test systems.

In doing its job, System Mechanic manages to balance the needs of novice users (“Don’t explain it to me, just fix it!”) with those of more technically advanced users (“Tell me the problem, and I’ll decide what to do.”). Post-analysis, the software displays a categorized list of problems found and gives you the option to repair them all at once, though to keep from drowning you in minutiae the list keeps the problem descriptions extremely broad. For more detail, you can right-click a category to see an itemized list of individual issues and choose to fix or ignore specific problems.

System Mechanic found a litany of issues on each of our test systems, ranging from unnecessary startup items to registry entry problems to “system clutter” (i.e. various temporary files and deleted items languishing in the Recycle Bin). It made a few missteps too. On our XP system, it reported a lack of anti-virus software, failing to recognize the presence of the Symantec Corporate Edition AV client. On the Vista system it flagged a startup file called launcher.exe as dangerous, though the file was actually a legitimate (if expendable) part of the system’s bundle of pre-installed software.

After allowing System Mechanic to make its laundry list of recommended modifications to our pair of test systems, the results were somewhat mixed. Our XP system definitely improved, booting slightly faster and running a bit sprightlier. However, System Mechanic’s ministrations had no apparent effect on our Vista system and were unable to cure it of its penchant to crash regularly.

If you are comfortable handing over the reins to System Mechanic, you can turn on its ActiveCare feature, which automatically analyzes the system and performs maintenance chores in the background. ActiveCare gives you a decent level of control over what actions it takes and when– you can set it to run every two-24 hours and individually enable/disable eleven different automatic repair categories.

To keep its activities as unobtrusive as possible, ActiveCare will only do its thing following prolonged idle times and then only subject to other conditions that you can configure. These conditions include high processor usage (indicating an important program might be running even if the system is unattended) or if the system’s running on battery power.

Whether you approve system changes yourself or let System Mechanic handle them automatically, a SafetyNet feature logs most modifications and will let you undo them if necessary, though you can only undo items as a group, not individually. You also can’t undo file deletions unless you configure SafetyNet to allow it, which of course won’t actually free any disk space.

If you’re the type that really likes to delve down into the nitty-gritty of system configuration maintenance, System Mechanic can accommodate you with a Tools menu that gives you direct access to several dozen task-specific utilities. Some of the offerings replicate features already provided by Windows (albeit scattered around the operating system), such as hard drive error checking and defragmentation, clearing cached Web browsing data, and the capability to create and restore system configuration snapshots (commonly known as restore points).

On the other hand, the software provides many useful functions not included with the operating system, like the ability to free-up orphaned system RAM, locate duplicate files and securely delete data.

System Mechanic’s 8.5 Business Edition costs $99 for a one-year subscription for up to 10 systems, which works out to a quite low $9.90 per PC. The per-PC cost may be reduced with larger license packs like $199 for 11 to 25 systems or $349 for 26 to 50, but the bulk-payment licensing approach may also increase it depending on how many systems you have (for example, 15 systems at $199 works out to $13.26 each). You can keep using the software after the subscription expires, but you’ll no longer get product updates. (Iolo offers a free 30-day evaluation version.)

Unfortunately, System Mechanic doesn’t provide a way to centrally deploy and manage the software so you’ll have to visit each PC to install and run it. (There is an option to receive periodic ActiveCare reports from individual PCs via e-mail, however.)

No piece of software is a panacea for all PC ills, but in the process of remedying configuration problems and inefficiencies, System Mechanic 8.5 Business Edition may be able to give misbehaving systems a needed boost. At the very least, it offers a comprehensive and inexpensive set of diagnostic and maintenance utilities that’s worth having on hand.

Price: $99 for up to 10 PCs, $199 for up to 25, $349 for up to 50 (one year subscription)
Pros: Easy for novice users to operate without sacrificing control and information desired by advanced users; inexpensive
Cons: Can’t solve all PC problems; no centralized configuration; inflexible quantity licensing