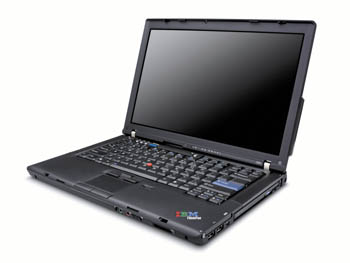 The latest ThinkPad notebooks from Lenovo — the Z-Series — offer small business owners and employees yet another way to stay connected while on the road: integrated high-speed EV-DO Wireless WAN (WWAN). In English that translates as the Verizon Wireless network that lets you connect to the Internet at speeds somewhere between 400 and 700 kbps and, in theory, approximating DSL speeds, but your mileage will definitely vary.


The Z-Series notebooks offer a plethora of wireless connection options: EV-DO, Wi-Fi, Ethernet, Bluetooth and modem — good news for mobile workers for whom connection to the home office is crucial and who may not always be able to find a handy — or secure — Wi-Fi hotspot.


All ThinkPad notebooks come with the ThinkVantage software utilities, which include Access Connections, a program that adjusts your wireless connections — automatically — letting you move from Wi-Fi to Ethernet to EV-DO without having to make any manual adjustments.


Mixing Business with Pleasure
The most noticeable feature about the Z-Series is the widescreen LCD, which, according to Rob Herman, program director for the ThinkPad brand, comes out of a blurred line between business and pleasure.


“There’s a definite trend of widescreens moving from the consumer space into the small business space,” said Herman. “Widescreen LCDs for notebooks have become very popular, and that popularity’s driven by widescreen TVs and monitors. People are more accustomed to looking at things in a wide aspect ratio,” he said.


Herman points out that the widescreen has benefits beyond viewing DVDs on your next business flight. The Z-Series consists of two different form factors: the Z60T has a 14-inch WXGA screen, which, according to Lenovo, provides 25 percent more screen real estate than a 14-inch XGA — or what Lenovo says is the equivalent of four additional spreadsheet columns. The Z60M’s15.4-inch WXGA display provides 30 percent more than a 15-inch XGA screen.


More Features
As mentioned earlier, the Z-Series comes in two form factors — the Z60T and the 260M, both of which are available in a wide range of configurations including Pentium M and Celron processors. You can choose from 256MB of memory up to 2GB, and hard drives range in capacity from 40- to 100GB. You can also choose from a variety of combination CD and DVD drives (recordable and re-writable).


You can add peripherals through a variety of ports including three USB 2.0 ports, S-Video, VGA and IEEE 1394 connections. The Z60 also includes a media card reader.


Lenovo will have a system configurator available on its site soon, but as of press time, it was not yet available.


Herman calls the 14-inch Z60T, with a starting weight of 4.5 pounds, “thin and light for travel. The heavier Z60M starts in at 6.6 pounds, and Herman referred to it as “more of a desktop replacement.” Both drives can weigh even more depending on the configuration you buy and the number of cells in the battery you choose.


Integrating Verizon Wireless’s EV-DO WWAN service — the antenna resides in the right side of the LCD panel — means that you don’t have to rely on a PC Card in order to connect. Lenovo says that helps eliminate hardware incompatibility issues and damaged antennas that stick out from the PC.


Designed to protect your notebook’s internal components — especially the data on your hard drive — the ThinkPad Z-Series features what Lenovo calls a “roll cage.” Herman said this magnesium frame offers 30 percent more protection and will be available on all future ThinkPad notebook models.


Herman noted that Verizon sells the service for $59.95 a month for unlimited connection if you also own a Verizon voice plan. Without a voice plan, the WWAN service costs $79.95 per month.