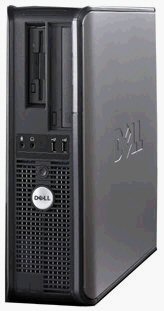 We no longer wear bellbottoms and the front half’s fallen out of our mullet, but we still appreciate retro chic. Kudos, then, to Dell for making a real oldie-but-goodie fashion statement: a desktop PC that you can place under your monitor. Remember those?

To be sure, you can position the new OptiPlex GX280 vertically as well as horizontally &#151 next to the monitor like a mini-mini-tower &#151 or configured in a true mini-tower case if you want some extra expansion room. But the 15.7 by 13.9 by 4.5-inch desktop model is an appealing compromise between ubiquitous towers and small-form-factor designs such as the OptiPlex SX280 with the clip-on LCD-monitor we tested last fall.

Speaking of LCD monitors, we’d recommend one here: We put a 17-inch CRT on top of the horizontal GX280 without any ominous creaking or cracking noises, but we’d hesitate to burden it with anything heavier.

Pipe Down
Actually, the big news about both the desktop and mini-tower versions of what Dell calls its new business systems’ OptiFrame chassis is its adoption of Intel’s quieter, cooler-running BTX replacement for the venerable ATX motherboard layout.

Inside the desktop, airflow from a front-mounted fan cools the CPU, buried beneath a massive heat-sink hood, before blowing across the other components to exit at the rear.

The result &#151 as with the Gateway BTX mini-tower reviewed a month ago &#151 is a PC that runs cooler and, while not silent, is noticeably quieter than your basic box o’ fans. Most of the time, there’s just the faintest background whir from the fans (plural because the power supply has one), often drowned out by what sounds like a slight crackle of static but is really the Dell’s hard disk.

Both in terms of ambient noise and physical footprint, then, the OptiPlex is an unobtrusive desk companion. It’s also a fast, well-equipped office worker, with the 3.2GHz processor with 800MHz front-side bus and 1MB of Level 2 cache &#151 joined by 512MB memory, an 80GB Serial ATA hard disk, a DVD-ROM/CD-RW combo drive, and PCI Express x16 graphics. With Windows XP Professional Service Pack 2 and a three-year warranty with next-business-day on-site service, our test system priced out at $1,008.

Odds are good that one of Dell’s never-ending memory- or storage-upgrade specials will whittle that below the four-figure barrier. Frugal SMB owners can whittle it further by choosing a slower Pentium 4 or 533MHz-bus Celeron D processor or settling for a CD-ROM or CD-RW or integrated video. Spendthrift managers can splurge on a faster CPU (up to the 3.8GHz Pentium 4 570), up to 4GB of memory or a DVD1RW drive.

Around the back, you’ll find six more USB 2.0 ports; audio-in, -out, and microphone jacks; and parallel, serial and Gigabit Ethernet interfaces, though no 1394 FireWire ports.

Pulling a lockable latch pops the OptiPlex’s top, offering handy tool-free access to a small but uncluttered interior. The optical drive covers two of the four memory sockets, but the flip of another latch lets you lift the DVD-ROM/CD-RW back and up for unobstructed upgrades. The 80GB Seagate Serial ATA hard drive &#151 one of the 7,200-rpm Barracuda series with 8MB buffer &#151 lies below the floppy-drive bay.

If you want to install a second hard drive, you’ll have to pick the mini-tower instead of desktop case. That’ll also get you a second front-accessible 5.25-inch bay and a slightly larger power supply &#151 305 versus 280 watts &#151 plus full-height expansion slots including one PCI Express x1 slot.

Dell’s plain but handsome USB keyboard offers a solid typing feel (a model with multimedia control keys costs an extra $29). The USB optical mouse with scroll wheel is fairly generic, but still worth its $14 premium over Dell’s rolling-ball mouse.

The GX280 desktop design has potential as an attractive balance between the ample expandability of a conventional mini-tower and the low headroom of a small-form-factor box. If you’re intrigued by the new, quieter generation of BTX desktops, you might as well consider a new configuration as well &#151 even if it’s the old configuration of using your PC as a monitor stand.