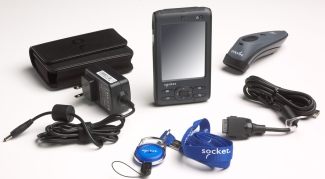 It was Mark Twain who once remarked, “the rumors of my demise have been greatly exaggerated”. If a handheld PDA (Personal Digital Assistant) could talk — and a few can, sort of — it might say something similar. True, the conventional wisdom states that the once popular stand-alone PDA is increasingly passé given the proliferation of smartphones that incorporate the same capabilities. And Dell — which helped make the PDA mainstream with its Axim line — stopped selling the devices earlier this year.

But while a smartphone may often be the better choice for the typical corporate knowledge worker, Socket Mobile‘s SoMo 650 reminds us that the stand-alone PDA is still a good platform for a variety of business applications that rely on mobility — think medical patient care, retail merchandising and inventory, or point-of-sale. Socket Mobile positions the $695 SoMo 650 as an alternative to larger and pricier industrial-style handheld computers or standard PDAs.

At first glance the SoMo 650, which runs Windows Mobile 5.0, looks like a fairly standard PDA. It measures 5- x 2.94- x 0.81-inches (neither large nor lilliputian) and weighs 6.3 ounces. As is typical of many such devices, the SoMo 650 uses an Intel Xscale 624 MHZ processor and sports a 3.5-inch, 240- x 320-pixel color LCD touchscreen (though the SoMo’s display offers better contrast and readability than most we’ve seen).

The SoMo 650 sports 128 MB of RAM and 256 MB of flash memory, and you can add to the unit’s storage capacity via a memory card. Another of SoMo 650’s differentiation points is that it provides slots for both SD (Secure Digital) slot and Type II CompactFlash (CF) cards, both of which are safely ensconced beneath a snug-fitting rubber cover. Many PDAs abandoned CompactFlash support long ago, but it’s still widely used for non-memory peripherals (of which the SoMo 650 avails itself — more on that in a moment). Two things you won’t need those slots for are Wi-Fi and Bluetooth, as both are built in.

Like all Windows Mobile-based handhelds, the SoMo 650 sports the standard directional pad and four dedicated application buttons. These four buttons can be customized to call up the application of your choice, as can two others located on either edge of the unit. You can also flip a hold switch to deactivate all buttons as well as the touchscreen.

Whereas PDAs often only come with sync and charging cables, the SoMo 650 comes with an actual docking station that conveniently does both. Better yet, the dock has two USB ports at the rear so it can function as a host device. The dock can also simultaneously charge an extra battery alongside the unit itself. Socket Mobile doesn’t publish a life rating for the SoMo 650’s standard 1200 mAh battery, but ours lasted just shy of four hours with both Wi-Fi and Bluetooth turned on. Less than constant use of either feature (especially the former) would probably allow that battery to last a full business day, and an extended-life 2600 mAh battery is also available.

What’s not so typical about the SoMo 650 is that it’s designed to withstand three-foot drops onto a hard floor (which we took the opportunity to verify), an impact that would leave many handhelds in a permanent vegetative state. Suffice it to say that while there are more rugged (read: bulky) handheld devices available for extreme harsh environments, the SoMo 650 is likely to survive a fair share of abuse in the field.

The SoMo 650 comes with the standard Microsoft fare common to all Windows handhelds (mobile versions of Office, Outlook, Internet Explorer, etc.). But you wouldn’t want to use the SoMo 650 for PIM-duty (or at least not solely for that), because the real value of the device comes by pairing it any of a number of optional input devices designed for mobile data collection. These include plug-in magnetic stripe and RFID readers (CF-based), various SD- and CF- based bar code scanners, as well as Bluetooth-based bar code scanners in wand and ring form.

Our eval unit came with plug-in CF and cordless hand bar code scanners, both of which were easy to configure and operate. (The hand scanner includes a pointed nub, which you can use in lieu of the stylus.) The device drivers for the various input peripherals are pre-installed on the SoMo 650, as is a utility called SocketScan that automatically plugs scanned data directly into your desired application. The various modules range in price from $250 to $1,200 depending on type and capability.

Another included utility, Wi-Fi Companion, makes finding and connecting to available wireless networks simple and uses easy-to-understand graphics to indicate the status and performance of such connections (it’s far superior to the standard Windows Wi-Fi utility). The SoMo 650 supports all major forms of wireless encryption and authentication including WPA/WPA2, AES, and 802.1x, and Socket Mobile said the unit’s Wi-Fi radio is designed to quickly switch between the multiple access points (as you’re apt to find in most corporate environments) in less than 200 ms. We only had a single access point to test with, but we did notice that the SoMo 650 connected to it almost instantaneously — much faster than the several seconds required by other Wi-Fi enabled PDAs and smartphones we’ve used.

While the SoMo 650’s operating system is Windows Mobile 5 rather than the more current version 6, Socket Mobile maintains this was to ensure maximum compatibility with existing applications. The company also pledges a three-to-five year product cycle to allow firms time to evaluate and deploy the device without having to worry about the product being put out to pasture.

If you’re looking for a durable handheld for mobile business applications, the Socket Mobile SoMo 650 is a good alternative to a standard consumer- or business-oriented PDA.

Joseph Moran
Previous articleEasySpeak PBX for Small Businesses
Next articleIs It Time to Get Gigabit Ethernet?