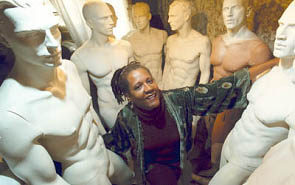 What would you do if someone gave you $100,000 to spend on technology to improve your business? If you’re like a lot of small business owners, you might not even know where to begin. That’s why the Small Business Technology Institute and Intel structured the World of Difference contest in phases, so that entrants learned more about how technology could impact their business as they advanced through each round. And why one lucky winner came away with an education along with the cash.


The contest, which began back in July of 2005, received more than 2300 entries. Over the course of four different phases, the group was whittled down to five finalists. We won’t keep you in suspense — Judi Henderson-Townsend, president and CEO of Mannequin Madness, an Oakland, Calif.-based mannequin liquidator, took the top prize: $100,000 of credit for Intel technology and services plus a $5,000 cash prize.


A mannequin liquidator — what the heck? “Yeah, people give me a funny look when I tell them that I spend my days surrounded by stiffs and dummies,” Henderson-Townsend said, laughing. As odd as it may seem, there’s quite a demand for affordable, used mannequins. Her prices for a full-sized model range from $250 – $1,100.


Henderson-Townsend both rents and sells them to a wide range of customers around the world, including artists looking for mannequin parts (remember that leg lamp in the movie, A Christmas Story?), vintage clothing resellers, museums and trade show vendors. Prada recently called her from Italy looking for a particular mannequin model it couldn’t find anywhere else. She sold them five.


In the Beginning
Back in 2000, Henderson-Townsend was working in the marketing department of a dotcom company when, through Craig’s List, she met a man who rented mannequins. He was going out of business, and she bought his stock of 50 dummies and started a part-time business. “I didn’t have any retail experience, and my last business had failed. But working at the dotcom helped me regain my entrepreneurial confidence and gave me the Internet savvy I needed,” she said.


She had a Web site built for her and began selling online — and through eBay, which she still does. She also started networking with department stores. They started referring people to her for rentals and calling her to help them dispose of their outdated mannequins.


“The environment is an important issue to me, and normally department stores send their old mannequins to landfills. I saw this as a win-win opportunity for me, the stores and the environment,” Henderson-Townsend said. She recently won an EPA Special Achievement award for recycling more than 100,000 pounds of mannequins.


By 2001, she had an inventory of 500 mannequins, left her job and began working her business on a full-time basis. She employs two full-time workers and five independent contractors. “One of the key factors for me was search engine optimization on my Web site,” she said. Her SEO efforts paid off it seems, since she’s got the top spot on Google when you search for “used mannequins.”


The Contest
Henderson-Townsend heard about the contest through her banker at Wells Fargo and entered, starting her educational journey and chasing a $100,000 carrot.


Lynn Castlevetro, director of small business strategic marketing at Intel, designed the contest with Andrea Peiro, the CEO of the Calif.-based Small Business Technology Institute. “We designed it specifically to be educational in nature so that as the contest progressed, the entrants would learn more about the potential for technology use in their business,” she said.


More than 2300 small businesses (defined here as companies with fewer than 100 employees) entered the contest, which consisted of four phases with contestants eliminated at each phase. In the fourth phase, the five remaining finalists presented their proposals to a panel of judges made up of more than 300 Intel resellers.


“We chose the resellers as judges because they’re the ones who really know small businesses,” said Castlevetro. “They have their feet on the street and are in the best position to make the final decision.”


Each phase included written material provided by Intel to guide business owners and required them to take a deeper look at their business in relation to technology. The phases included:

The funding and effort Intel has invested in this contest marks a significant change in the way it looks at small business. In the past, Intel considered a company small if it had fewer than 1000 employees. Now that the company has readjusted its thinking, how will this technological behemoth reach out to its smallest market?


“SMBs don’t have a direct relationship with a big company like Intel,” said Castlevetro. “They rely on, and are influenced by, family, friends and peers. We have to earn their trust by developing relationships with community partners and resellers who have the trust of the small business community.”


The Mannequin with the Plan
Paul Tu, a business development strategist with PC Club, an Intel reseller out of City of Industry Calif., chose Mannequin Madness and helped Henderson-Townsend to create a solid technology plan. Using hardware, software and services provided by PC Club and Intel, he’ll put that plan into effect. For his efforts, he won $50,000 of Intel marketing and advertising services for PC Club.


The first step, Henderson-Townsend said, is using NetSuite to integrate back-office tasks (accounting, inventory, purchasing and so on) with the front-office processes. “We look like a huge company on Google,” she said “The reality of who we are is much bigger than our day-to-day operations. The $100,000 will let us build our back-office infrastructure so that it matches our public face.”


Step two involves creating an automated inventory management system. Tracking inventory presents an interesting challenge since the company never knows when a store will dispose of its mannequin stock, what kind it will be or what condition it’s in.


As part of the research she did on her own during the contest, Henderson-Townsend attended a seminar on RFID technology. She plans to use Intel RFID tags to speed and simplify inventory tracking. The embedded chip technology, based on radio frequency, is faster than bar code scanning, holds more descriptive data and will let them scan inventory on high shelves in the warehouse without climbing up to it.


“I’m truly excited about using RFID, because I can see how it will help us be more productive,” she said. “We’ll be able to link the RFID tags to customer requests, so that the system sends e-mail to customers telling them the item they want is now available.” She also plans to embed tags in rental stock in order to track them. “Basically, we’ll be giving our dummies a brain.”


She pointed out that the $1-per-tag cost of RFID might not make economic sense for a company selling inexpensive items, like bags of chips, for instance. “But the price of our inventory is high enough to make it worthwhile for us.”


The third leg of the plan includes wireless notebooks with EV-DO, Wi-Fi and Bluetooth capability plus Webcams. This will let her independent contractors go into the field, film mannequins on site, and send video images of the inventory to the home office.


The technology will let them see — in real time — the shape and condition of the inventory. “Mannequins are not created equal,” asserts Henderson-Townsend. “You’ve got Hyundais and you’ve got Mercedes. The Webcams will let us see what the inventory looks like so we don’t end up paying Mercedes prices for Hyundai quality.”


Going Forward
Ultimately, Henderson-Townsend plans to make Mannequin Madness the first nation-wide liquidator for used mannequins. “We’re creating a cookie-cutter business model to simplify expansion,” she said. She plans to relocate the headquarters to New York City by the end of this year and run satellite offices in San Francisco and Las Vegas. She also plans to add offices in Chicago and Atlanta sometime in 2007.


Henderson-Townsend can’t quite believe she won the contest and now has the plan and the wherewithal to make it come true. This dynamic woman and sharp entrepreneur has become a resolute advocate for small business technology.


“I would never have taken the time to learn what technology can do for my business if I hadn’t entered this contest. During the phases, I realized that even if I didn’t win, I had learned so much that I would be better off than when I started this whole process. And I’ll tell you this,” she said confidently, “If something as low-tech as mannequins can benefit from technology, then any small business can benefit.”


FOR DUMMIES(r) is a registered trademark of Wiley
Publishing, Inc.