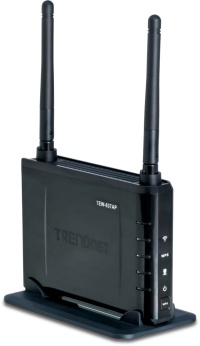 Like every other technology, Wi-Fi is constantly evolving. You buy the latest-and-greatest networking gear, and in a few years it’s considered old and slow. The alphabet soup of wireless standards has expanded from a, b, g to now include n—plus y for enterprises. The signals are faster, stronger and more secure.

While upgrading the brains of your networking gear—the firmware and drivers—provides many of these enhancements, you usually have to replace your equipment to take advantage of most new features and technologies. For instance, you must buy new hardware to take advantage of the emerging standard, 802.11n (or Draft N now), which offers increased range, faster data rates, and better performance.

The Wireless Easy-N-Upgrader does offer one advanced feature, multiple SSIDs. This lets you broadcast up to four different signals with varying security measures. This comes in handy, for example, if you still must use WEP encryption for some of your older equipment that doesn’t support WPA capability. Since you cannot take advantage of the higher speeds wireless N offers when using WEP, you can create a separate signal for the older machines and one for the new N clients.

The Wireless Easy-N-Upgrader comes with a simple configuration wizard. We just popped in the bundled CD and accessed the Windows-based utility. It helped us choose the IP address scheme and set the encryption.

Simply put, the Easy-N-Upgrader does make the installation simpler. Another plus is that you’re prompted at the end of the wizard to print and/or save the network and encryption details. You can quickly store them in a safe place.

The only gripe we have about the installation is that the wizard doesn’t let you configure the enterprise version of WPA/WPA2. Though you can set this all up from the Web-based utility later, it would be nice if it were available from the wizard, for those who have access to the required RADIUS server.

Though TrendNet and other wireless vendors try to make upgrading to wireless N seem so easy, sometimes it isn’t. Here are several things to consider when making the upgrade:

We found TrendNet’s 300Mbps Wireless Easy-N-Upgrader provides a way for you to add wireless n support to your Wi-Fi network, in one the simplest and easiest methods possible. Though it does lack a Gigabit network port, most people won’t be affected if there’s only one wireless N access point on the network.

Keep in mind, the MIMO technology these wireless N products use also helps increase range even if the high speeds can’t be used or if older wireless g adapters are stilling being used on the network.

Eric Geier is the founder and president of Sky-Nets, Ltd., a Wi-Fi hotspot network. He is also the author of many networking and computing books, including Home Networking All-in-One Desk Reference For Dummies (Wiley 2008) and 100 Things You Need to Know about Microsoft Windows Vista (Que 2007).