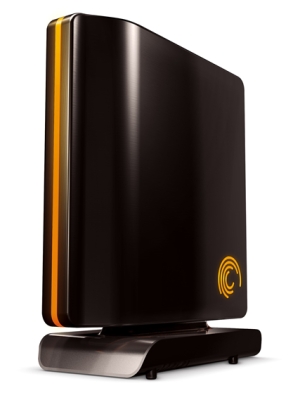 Seagate would prefer that you think of their FreeAgent Pro not just as a hard drive but as a “data mover” that’s capable of giving you both local and remote access to your data. That implies the functions of a NAS device, and although the FreeAgent is merely an external hard drive, it’s one with multiple interface choices and bundled software that does let you backup data as well as copy it to an online storage account.

Design and Features
The FreeAgent Pro comes in 320, 500 and 750 GB flavors, but since all models are single-drive devices, RAID isn’t an option here. We reviewed the highest-capacity model, which sells for $339.

The drive, which stands vertically and has an attractive brushed-metal chassis with tapered ends, has a base that houses the unit’s power connector and modular input/output interface ports. You get a choice of USB 2.0 or eSATA (External Serial Advanced Technology Attachment) connection, but we couldn’t make use of the latter since our test systems lacked built-in eSATA ports (relatively few systems have them). It’s definitely the preferred interface if you can take advantage of it since it offers a theoretical maximum throughput more than six times higher than USB (3 Gb vs. 480 Mb per second).

It would have been nice if the FreeAgent Pro included an eSATA cable and slot bracket that would let you extend a motherboard eSATA port out the back of your system, but we acknowledge that most prospective buyers of external drives probably aren’t very interested in getting under the hood of their machines.

Installation
Looking for the FreeAgent Pro’s power switch proved challenging until we realized that it comes in the form of a touch-sensitive base. In any event, the device comes to life on it’s own, powering up automatically once it’s connected to a PC. Instead of the typical itsy-bitsy power light, the entire top and front edge of the glows orange — it’s a nice effect, but you can turn it if you find it distracting.

Getting the FreeAgent Pro up and running on an XP system was a snap. The software isn’t included on CD but rather pre-loaded on the drive, and you’re prompted to install it once Windows has recognized the drive. The drive doesn’t come with any documentation save for a concise quick start guide, but that should be more than enough for most people. (You can download more detailed docs in PDF form from the Web site.) Although you can use the FreeAgent Pro with a Mac, the bundled software isn’t Mac-compatible.

Bundled Software
FreeAgent Pro comes with FreeAgent Tools, a utility that performs basic drive diagnostics and lets you configure a few settings like a power-saving mode and enabling or disabling the aforementioned lights. FreeAgent Tools also provides a System Rollback feature that can take regular snapshots of your configuration, to which you can revert in case your system goes haywire. Windows’ built-in System Restore feature does the same thing, but Segate’s software gives you the option of creating automatic snapshots more frequently than once every 24 hours. System Restore can’t do that unless you modify the computer’s Registry.

Most people who purchase external hard drives do so at least in part for storing data backups, and for this the FreeAgent Pro also includes a full (albeit Seagate-branded) version of Memeo’s AutoBackup software. The software is quite easy to work with and has a simple interface that lets you set up step-by-step backups with minimum grief. AutoBackup lets you quickly select common types of critical data (such as photos, music, Outlook/Outlook Express data or the contents of My Documents) for backup. You can also add your own custom folders to backups and include and exclude certain locations and file types.


Once a backup is complete, AutoBackup automatically keeps it up to date as the original files changed, and the software can be configured to retain multiple versions of data files for more restore flexibility. A one-click restore feature lets you initiate them directly from the backup folder even if the AutoBackup isn’t installed on the system. There’s also an option to perform encrypted backups protected by a password, but they can only be restored through the software.

Although you can use AutoBackup to back up an system’s entire hard drive, you can only do a complete restore after reinstalling the operating system first; there’s no option to boot from a CD to restore a blank drive. AutoBackup will let you store backups on devices other than the FreeAgent Pro, like other hard drives, network and flash memory drives and even an iPod, for example (but the software’s only licensed for use on a single system).

Online Storage
Since the FreeAgent isn’t a NAS device, it doesn’t offer direct remote access, but for the times you want access to your data from a distance, you can upload files to an online Seagate Internet Disk storage account (also run by Memeo) that comes with the FreeAgent Pro. The Internet Disk site offers the option of an easy-to-use drag-and-drop interface, but it only works with Internet Explorer, not Firefox. You can also configure AutoBackup to save backups to your Seagate Internet Disk account.

The FreeAgent Pro’s software will also let you upload your photos to Shutterfly, but those using Flickr or other services are out of luck.

We’d have preferred — and we think buyers would appreciate — that the FreeAgent Pro come with a permanently free Seagate Internet Disk account, even if it offered limited storage. Nevertheless, with acres of capacity, lots of interface choices including eSATA and a bargain price, the Seagate FreeAgent Pro should leave most people satisfied.

Joseph Moran
Previous articleComputer Sharing: Is it Good for What Ails Your Small Business?
Next articleQuickBooks and Linux: A Server Story