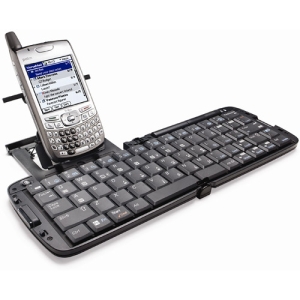 If you’ve got a Palm Treo, you probably bought it because you spend a fair amount of time editing or creating e-mail and other text documents on the road. The Treo’s QWERTY keyboard makes that much easier than pecking away at an on-screen keyboard or resorting to predictive text technology, but even the Treo’s keyboard is no match for a “real” keyboard for heavy typing.

For times when your typing volume makes extended use of the Treo’s internal keyboard inefficient or uncomfortable, (after all, you don’t want to come down with a degenerative thumb disease), you might consider the $99 Palm Wireless Keyboard with Bluetooth Wireless Technology.

The Palm Wireless Keyboard works with all Treo models since the 650 (its CD includes drivers for both Palm OS and Windows Mobile-based Treos). It also works with the Palm TX and Tungsten E2. However, unlike Palm’s less expensive (and IR based) Universal Wireless Keyboard, it’s not compatible with other Tungstens, Zire models, or any non-Palm handhelds.

Design
A pair of conventional alkaline AAA batteries (included) powers the Palm Wireless Keyboard, which Palm rates for up to five months of battery life. It measures 4- x 5.75- x 0.75-inches when closed, so it’s small enough to easily carry in a bag or briefcase.

But press a button, and its width doubles and the unit opens into a full keyboard that’s roughly the same size as one you’d find on an ultra-portable notebook. Four small rubber feet ensure the keyboard remains firmly planted when on a flat surface, and a sliding switch keeps it locked in the open position when not (such as using it on your lap).

A pullout tray on the keyboard’s upper left side stores a pop-up easel that keeps your Treo positioned for optimal viewing while typing. An adjustable support leg lets you position the phone at one of three angles, and while there are pass-through spaces seemingly large enough to accommodate the charging and synchronization cables, we couldn’t find a way to use them without undermining the stability of the keyboard.

The easel detaches completely if you want to set the Treo a bit further away from the keyboard, but the apparatus feels flimsy enough that doing so doesn’t inspire confidence (take care whenever folding it back into the closed position, even when attached).

Usage
Getting the keyboard working is a simple matter of installing the appropriate driver onto your Treo (we used a 680), launching the BTKeyboard software and then briefly holding down a connect button to pair the unit to your phone.

While the keyboard’s key travel is fairly shallow, it’s still provides good feedback and most people should find it comfortable to use.

One nit pick: the folding hinge bisects the space bar at precisely the point where our thumb hit it. It won’t be an issue for everyone, but it did sometimes cause our space bar presses to not register.

The keyboard uses keystroke combinations to replicate the Treo’s specialized application and five-way directional buttons, and you can program command keys via the software.

If you’ve got a Treo and do lots of typing from the road, the Palm Wireless Keyboard with Bluetooth Wireless Technology can be a good investment in your sanity, not to mention a bulwark against thumb-itis.

What is Marketing Automation