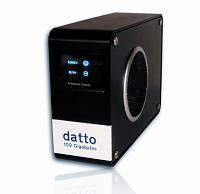 You probably don’t need anyone to tell you how important it is to frequently backup business data, but if those backups are stored only at the office, you’re still rolling the dice. One need only look at recent news stories about fires, floods and tornadoes to get a sense of the potential risks involved. Unless a backup copy is stored safely off premises, you’re still vulnerable to catastrophic data loss.

One obvious way to address this risk is to take backups off site. Another is to back up to an offsite server, which is where the Datto Backup 100 comes in. This NAS device’s remote backup feature automatically duplicates its data to an online storage server, ensuring a redundant copy is always stored safely out of harm’s way.

Specifications and Initial Set Up

The Datto Backup, which is compatible with Windows, Mac OS X and Linux, is a compact device, barely larger than the single hard disk it contains. The two available models, 100 and 500, provide either 100 GB or 500 GB of storage capacity for $399 and $599, respectively. They connect to your network via 10/100 Ethernet (though Gigabit Ethernet is more the norm these days).

Our evaluation unit was the 100 GB model, and setting it up was a quick and easy affair. After plugging it into the network and power (there’s no on/off switch), we headed to Datto’s Web site to create an account and register the unit. Upon doing so we were able to verify connectivity to our device, which had automatically obtained an IP address on our local network via DHCP. The Datto Backup was able communicate with the company’s servers through our broadband router’s NAT firewall without any configuration needed on either device.

After a link to the Datto Backup is established, a setup wizard walks through basic configuration parameters, including the automatic creation of a 256-bit AES encryption key used to safeguard data while en route to Datto’s servers and subsequently stored there. Your upstream connection to the Internet is also polled to determine how much bandwidth is available for remote backup &3151 in our case it was around 1 Mbps, of which the Datto Backup reserved the right to use bit more than half, or 610 Kbps.

After completing the initial configuration, you can log directly into the Datto Backup through a browser to perform administrative tasks, including creating shared folders and user accounts. Helpfully, you don’t need to know the Datto Backup’s IP address on your network because the URL device.dattobackup.com always serves as a convenient path to the device.

The Datto Backup’s administrative interface is straightforward (check out the demo ), but it doesn’t have the visual polish or some of the features found on NAS devices from better-known vendors. The Datto Backup can join a Windows Domain, which lets you take advantage of user accounts and permissions already in place on your network. However, when it comes to creating shared folders and user accounts on the device itself, two limitations are worth noting.

The Datto Backup’s raison d’être is remote backup, and in this area it acquits itself well — the device automatically connects to its remote servers every 10 minutes to back up new or changed files. To prevent the Datto Backup from having a noticeable effect on your Internet connection, it offers wide latitude to decide when backups take place and how much bandwidth they’re allowed to consume. You can put a fixed cap on how much upstream bandwidth the Datto Backup gets, or define a schedule that limits bandwidth on specific days or times.

Of course, when you first copy data to the Datto Backup, the initial remote backup can take quite some time. Our 4 GB backup took a mere 24 hours, but using significantly more of the unit’s capacity can mean the initial backup takes days or even weeks, depending on how much data is involved and the speed of the upstream Internet connection.

To get over the hump, Datto allows customers to send in data-laden units so the company can perform the initial backup over its own speedy network links. The company says that in most cases it can have the unit en route back to the customer the same day it’s received. Round-trip shipping costs are borne by the customer for 100GB units, but Datto picks up the tab for 500GB models.

Since the Datto Backup is in regular contact with the company’s servers, the unit is constantly monitored. You get an alert when the device’s storage runs low or if the unit doesn’t check in for 96 hours (a customizable time frame). You can also remotely access Datto Backup’s contents through Datto’s Web site, although only via FTP, which isn’t a secure method.

Because the Datto Backup’s price tag is steep for the amount of storage it provides, you might think the remote backup service is included in the price of the hardware. That’s not the case, however; and you must subscribe to the remote backup service separately. The cost for the 100 model is $9.99 a month or $99.99 for a year paid in advance and $24.99 and $249.50, respectively for the 500 GB unit. (You can extend your remote backup subscription via Google Checkout right from the device.)

The cost of the hardware plus service still manages to compare favorably to what most online backup services charge for 100 GB of storage, and you don’t have to worry about software licenses or installation on multiple computers. The Datto Backup’s high price tag is also somewhat mitigated by a good hardware replacement warranty — three years on the 100 GB model and five years on the 500 GB — as well as toll-free phone support provided 10 hours a day (9-7 ET) seven days a week (support is via e-mail the rest of the time).

Although a typical small business NAS device gives you a lot more than 100 or 500 GB in exchange for your $400 or $600, the Datto Backup will be worth the cost to anyone that wants the peace of mind that comes with hassle-free offsite backup.