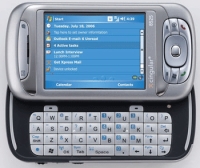 These days, the most popular mobile phones (smartphones included) generally tend to be the thinnest and lightest models. But it’s hard — if not impossible — to eliminate size and weight without negatively effecting desirable qualities such as features, performance or battery life, so the most powerful smartphones tend to be on the thicker and heavier side of the continuum.


A recent smartphone from Cingular is a case in point. The 8525 (previously known as the HTC Hermes) is the follow-up to the earlier Cingular 8125. The blocky 8525 measures 4.43- x 2.28- x 0.86-inches and weighs in at 6.2 ounces, which makes it slightly slimmer but more than an ounce heavier than its forbearer. But in exchange for the 8525’s excess heft, you get a device that can do just about everything but make cappuccino.

Design & Features
The Windows Mobile 5.0-based Cingular 8525 is a quad-band GSM device. It includes a PTT (Push To Talk) button, but this feature is currently inactive on the phone. Cingular says a firmware upgrade available in 2007 will enable the PTT function.


For data connections the 8525 can get you online via EDGE/GPRS, but it also supports UMTS/HSDPA for higher-speed data that are connections roughly comparable to EV-DO service from Verizon or Sprint. Although currently only available in a few dozen markets, Cingular’s UTMS/HSDPA service (which it calls BroadbandConnect) has the unique advantage of allowing simultaneous voice and data connections. Other wireless connectivity methods supported include 802.11 b/g Wi-Fi and Bluetooth 2.0, and you can use the 8525 as a modem for your laptop.

Dominating the front of the 8525 is a very nice (and large) rectangular 2.8-inch display capable of 240 x 320 resolution and 64K colors. Since the 8525 runs the Pocket PC edition of Windows Mobile, the screen is touch-sensitive; a short telescoping stylus stows in the bottom of the device. You can also traverse the 8525’s menus using an excellent thumbwheel on the left side of the unit.


The 8525 is powered by a 400 MHz Samsung CPU (the 8125 made do with a mere 200 MHz processor), and sports 128 MB ROM and 64 MB RAM. About 50 MB of which is available for personal storage, and if you need to add more you can do so through the 8125’s MicroSD slot. Unlike many smartphones, the 8525’s memory slot isn’t buried underneath the battery or even located in the battery compartment — it’s easily accessible on the lower-left side of the device.

In addition to the standard D-pad, send/end and soft keys, the 8525 sports several dedicated function keys on the front and side of the device, including ones to launch e-mail, Internet Explorer and Windows Mobile’s Comm Manager utility.


Sliding the 8525’s screen over to the right reveals a QWERTY keyboard underneath. The keys are large but also tightly spaced, so it may take a bit of practice to avoid mistypes. Since there’s no dedicated numeric keypad you dial using the on-screen keypad, and we did find its buttons a bit small. (The 8525 also offers voice-activated speed dialing.)


When in power-saving mode, exposing the keyboard doesn’t automatically wake up the phone, so you must do it manually by pressing the power button. It’s a bit of an inconvenience, but probably less of one than finding a battery prematurely drained due to inadvertent jostling of the phone. The 8525’s battery Li-Ion is rated for four-to-five hours of talk time, or about 200 hours on standby when the phone is used in GSM mode.


Messaging & Applications
Any phone with a full QWERTY keyboard will be particularly attractive to people who rely on mobile e-mail, and Cingular’s 8525 does offers a host of messaging options. The phone comes with Microsoft’s Messaging and Security Feature Pack, which includes Direct Push e-mail. Therefore, organizations running Microsoft Exchange (SP2) can automatically keep e-mail and other Outlook-hosted information (like calendar, contacts, and tasks) current on the 8525 without having to configure the client to download it at scheduled intervals. The 8525 also can provide push e-mail through Good Mobile Messaging.


If you want to access your personal POP/IMAP e-mail account via the 8525 or your company isn’t running one of the aforementioned enterprise e-mail servers, you can still access your e-mail through Cingular’s Xpress Mail feature.


The 8525 comes with lots of useful pre-installed software including a ZIP utility and ClearVue’s PDF viewer. Since the 8525 runs the Pocket PC edition of Windows Mobile, you get the full suite of Microsoft mobile Office applications: Word, Excel, and PowerPoint, which you can use to create and edit documents, not simply view them as you can only do with the Smartphone version of Windows Mobile.


The 8525 also provides a link to MobiTV, which you can use to view streaming video channels (or listen to XM satellite radio), provided you’re willing to ante up a monthly $9.99 subscription fee.

The Camera
Shutterbugs will appreciate the 8525’s 2 megapixel camera, a step up from the previous model’s 1.3 megapixel camera. The 8525’s camera includes both a self-portrait mirror and a flash, and it has a lens that you can manually switch between normal and close-up modes.


The 8525 took decent photos, and you can also record CIF-sized (352 x 288) videos with the phone. The 8525’s documentation doesn’t specify exactly what close-up range is, however, and we found that using the close-up mode generally resulted in blurry shots whenever the camera was more than a few inches away from the subject.


Companies that don’t care to issue camera-equipped phones to their employees can request the Cingular 8500, which omits the camera but otherwise has all the features found in the 8525.


Accessories & Pricing
Items shipped with the 8125 include an AC adapter, stereo earbuds, and a sync/charging cable (alas, docks seem to now be a thing of the past, even on high-end devices). All three cables connect to the 8125 via a single USB-type connector, but Cingular thoughtfully includes a Y-cable so you can charge the phone and use the headset at the same time.


A spare stylus is also included, but the 8125 doesn’t come with a belt clip or carrying case. (Unless you have an affinity for parachute pants, simply sticking the 8125 in a pants pocket isn’t really a viable option.) The 8525 is one of the few devices we’ve seen recently that includes an external antenna connector, though it’s location adjacent to the camera probably isn’t the best.


The 8252 will set you back $449 when purchased directly from Cingular along with a 2-year service contract, though a $50 mail-in rebate reduces the ultimate price down to a still pricey $399. (The 8125 is still available via Cingular’s Web site for $349 and carries a heftier $100 rebate.)


On one hand, the 8525 is chunky and it’s not cheap. On the other, it’s got just about everything you could ask for in a smartphone, save the svelte footprint and bargain price tag. True road warriors — for whom productivity trounces trendy and thin — will find much to like in the Cingular 8525.