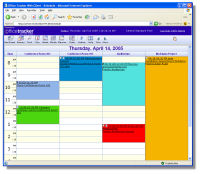 Tracking and scheduling appointments can be a major headache for many SMBs, especially if your employees are constantly on the move. Recognizing the need for scheduling on the run, Milum Corporation now offers its OfficeTracker group scheduling software in a Web-based version that you can access from any computer with a browser and an Internet connection.

Although it’s Web-based, Office Tracker 7.0 is not a hosted or managed service &#151 you buy one piece of software outright and download it &#151 the Office Tracker Server &#151 to your computer. The software “publishes” schedules over the Web where your employees and customers who have login accounts and passwords can access them. Once the software’s installed, your employees can schedule appointments or reserve rooms, equipment and vehicles.

“It’s a natural extension of our desktop software,” said Hayes. “You can access your schedule from anywhere, easily, without having to load any software on the PC you’re using to access &#151 all you need is a browser connected to the Internet.”

Office Tracker in Action
For John Hales, vice-president of OCI Technologies, managing his schedule, along with the company’s other nine independent contractors, was no easy task. The 10-person technology consulting and training company has no centrally located office since each employee works from home and flies to various assignments around the world for weeks at a time.

Although Hales knew about and liked Office Tracker, he wanted Web-based software that would allow his team to share calendaring and let each person manage his own schedule.

“When we heard there was a new Web-based version of Office Tracker, we jumped right on it, ” he said. “Before Office Tracker, I tracked schedules on Excel spreadsheets. Everyone had to e-mail me their schedules and update me with any changes. I’d spend about five hours a week managing the process and chasing down all the information, and believe me, I have better things to do than push scheduling paper around.”

Hales says that with Office Tracker, each person is responsible for his or her own schedule. “It’s been a real time-saver for everyone involved. Office Tracker makes scheduling a much cleaner process,” he said.

The consultants aren’t the only people using Office Tracker at OCI. Hales’ group configured Office Tracker so that customers have read-only access, which lets them see which consultant or trainer is available on any given day so they can call and book an appointment.

“Our customers appreciate the time-saving. They can see when we’re available, which makes it easier for them to schedule the trainings,” Hales said. “We can provide a much faster customer response and reduce the amount of calling back and forth to find a date that works &#151 and that means fewer missed opportunities and happier customers.”

The software is compatible with computers running Windows, Mac, Linux or Unix and supports a variety of browsers including Internet Explorer 5.0 (or later), Mozilla, Safari, Netscape 4.0 (or later) and Java Script 1.2 (or later).

System Requirements
The computer you install Office Tracker on should meet (at the very least) the following specs:

* More memory and disk space may be required, depending on maximum number of client connections and average number of events scheduled.