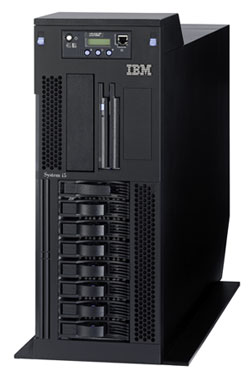 
IBM says that its goal is to provide a complete system that is reliable, easy to manage and easy to secure while offering core features such as built-in virus resistance security tools, database, backup and recovery tools, storage, Web server and Web-based management tools.


For example, Jarman said, IBM hasn’t included the virtualization and Storage Area Networking capabilities typically bundled in System i servers, but makes them available as options in the System i 515 Express.


Jarman said that System i Express will also appeal to small businesses looking to consolidated servers onto one integrated system. “With Window servers, you typically have one application per server — one for your Web server, one for your database, one for e-mail. There’s lots of management involved.” The System i servers are designed to run multiple server applications on one box.


IBM points to research from Gartner to reinforce the problem of server sprawl even among small businesses. The Stamford, Conn.-based firm reported last November that the typical small business has an average seven servers deployed on site.


The System i 515 and 525 are based on Power5+ processors that support applications running in IBM i5/OS, Windows, Linux and AIX. The servers are available with either one or two processors. Jarman said that you have the option of using the second processor on an on-demand basis — “even on a temporary basis.”


“Say it’s a week before Christmas, and you need more capacity. You can switch on the second processor without rebooting or having to take down your Web site,” Jarman said.


Of course, Jarman said he knows that IBM needs to rely on independent software vendors and System i resellers to reach more small businesses. Many small businesses rely on specific vertical application to drive their business, and that’s where IBM hopes to find a foothold. “Small businesses tend to start with their business solution and work backwards [towards the server hardware].”


System i 515 and 525 Express supports to to 16 GB memory and eight 560 GB disk drives. They will available through IBM Partners later this month, according to the company.