Networked Attached Storage: Easier and Better Than Ever 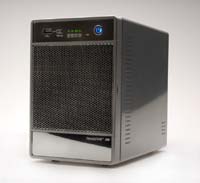 If you’ve got a LAN and you’re sharing storage, you know that networked storage is the Right Thing to Do. After a few weeks spent with the ReadyNAS NV, we’re convinced that this fast and capable little NAS unit is the Right Way to Do It. Infrant Technologies’ ReadyNAS NV represents the second generation of the company’s NAS devices aimed at small-business and home-office users.


Like earlier ReadyNAS configurations, the NV makes it easy to share mountains of storage (up to two terabytes) among Windows, Unix and Mac clients. As with earlier units, the ReadyNAS NV is easy to purchase and easy to install. The best part though, is the NV’s new availability and reliability features that make it a fine choice for critical business applications.


We tested a 1 TB ReadyNAS NV, configured with four 250 GB Seagate SATA drives, which sells for $1,199 (MSRP). The unit came in an XRAID configuration (which we’ll discuss in more detail below), yielding 676 GB of usable capacity. You can configure the ReadyNAS NV for RAID levels 0, 1 or 5 if you prefer. The ReadyNAS NV supports RAID in hardware and setting the unit to RAID 0 would make most of the full terabyte available for storage. But we think that most small businesses will prefer Infrant’s own XRAID mode.


Small Business NAS 2.0
XRAID is dynamic, providing redundancy or more capacity as more drives are added or smaller drives are replaced with larger units. XRAID works with any number of drives in the ReadyNAS NV. With one drive, you get no redundancy; with two, you get a mirror; and with three or four, you get one drive reserved for redundancy and the rest usable storage. As long as you have two or more drives in the set, a single drive failure won’t cause data loss.


XRAID is dynamic both in the sense that it automatically determines the best data placement based on the number of drives and in the sense that it automatically shifts from setting to setting without requiring human intervention. That last part is so cool that it’s hard to resist putting it in italics. This is the data protection of RAID without the complex configuration of RAID, all boiled down to the action of plugging in more drives or replacing smaller drives with larger ones.


Flip open the front panel grill of the ReadyNAS NV and you have access to four drive trays. Push an eject button and both the tray and drive pop out. You can do all this while the ReadyNAS NV is up and running, because the drives are hot-swappable. This is fun to do in a review, but more useful in production when replacing a failed drive or upgrading to a larger-capacity device.


When you plug in the new unit you get a “disk add” event reported by the ReadyNAS NV and then it initializes and synchronizes the new drive with the rest of the array, all without any interruption in service. (When we popped out one of the 256 GB drives as a test, it took about five hours of background work until the array was again completely redundant.)


If you use the ReadyNAS NV as primary storage, you’ll have to back it up. If you use it to back up other devices, you’ll want the tools to automate the process. The device includes an automated backup facility that lets you set the NAS either as the target or as the source for scheduled backups. You can schedule periodic full and incremental backups with a variety of options.


Key features such as simple RAID management and hot-swap support are the main reason we label the ReadyNAS NV “next generation.” But the ReadyNAS NV gets some style points, too. It’s smaller, consumes less power and, frankly, is better looking than Infrant’s previous non-rack mount ReadyNAS units. It has a front-panel USB port and a front-panel programmable backup button that backs the device up to a USB drive by default.


The ReadyNAS NV can stream media such as video and music content to players over the network (it supports universal plug’n’play AV media adapters and networked DVD players). It can make use of gigabit Ethernet connections and jumbo frames (larger packets of data sent across the network), and it can even play the part of network print server if you attach a USB printer.


Flexible Shares
Setting up the ReadyNAS NV involves plugging it into the network and running through a simple Web-based configuration. Actually, before you can run the Web configuration you have to find the newly installed ReadyNAS on the network. Infrant provides a small utility that runs on all supported clients (Windows, Mac and Linux) for doing just that.


We do have one minor complaint about the Web setup. You’ll need to click your way through an expired certificate to gain access to the https configuration page While it’s hard to deliver a standalone https server with a valid certificate, we would like to see a tip in the manual before the scary dialogs in the browser).


The Web setup has a wizard interface that’s good the first time through, and an advanced mode that’s better later, when you just need to make one or two changes.


Among the most important tasks in working your way through the initial setup is to choose the Windows file security mode for your installation. The easiest mode to use (behind a firewall) is Share, where there are no accounts to maintain, although passwords can be set per share. User mode uses Windows user accounts on the ReadyNAS NV. Domain mode offers the most sophistication, supporting Windows networks running domain controllers or Active Directory. Flexibility here helps to make the ReadyNAS NV a good fit for medium-sized company networks as well as offices with just one or two people.


The ReadyNAS NV includes a built-in SMTP server and can send e-mail alerts for eight kinds of interesting events, from disk failures to over-temperature conditions. You can also use an external SMTP server if your firewall blocks mail sent by the ReadyNAS.


Setup is easy, and the ReadyNAS NV is more-or-less ready to roll with its default selections. But performance is an important consideration when it comes to any NAS. The ReadyNAS NV lets you tweak a number of performance factors to match your network. These include write caching (writing data temporarily to cache memory before writing it to disk), journaling (writing file system changes to a log in the event of power loss), optimization for the Apple OS X operating system and other settings.


Many selections come down to a choice between increasing speed and guaranteeing recovery in case of unexpected power loss. If you can run the unit on a UPS, you may be able to take a less conservative approach and get better performance.


Sharing Files
The ReadyNAS NV is first and foremost a CIFS and NFS server, serving files to Windows, OS X and Unix clients. The unit also supports some more exotic sharing mechanisms, including Web (HTTPS) shares and FTP. FTP might be handy on the internal network, but it is not secure and should not be used for remote access. We don’t know if we have enough confidence in the built-in HTTPS server to share important, proprietary files across the Internet yet, but the ReadyNAS NV can optionally restrict Web access to selected hosts, better protecting Web shares.


The ReadyNAS NV supports gigabit Ethernet, but we run 100Mbps Ethernet on our test network and so were limited to that speed. We ran with full speed optimizations (all caching on and all journaling off). Dragging and dropping a folder from an XP client (CIFS) to the ReadyNAS NV took a little less than twice as long as making a local copy, and dragging from the ReadyNAS share to the XP client takes around three times as long as a local copy. Both times are good, and the write performance shows how the ReadyNAS NV puts write caching to good use. We got equivalent to slightly better performance from an NFS client.


At $1,199 as-tested ($1.77 per usable GB in an XRAID configuration), the ReadyNAS NV isn’t the cheapest NAS you can buy for your small business. But we think that its sophisticated RAID technology, hot swap capability, solid performance and full feature set make it an excellent choice.


Steve Apiki is a freelance writer and software developer who works for a small business in Peterborough, New Hampshire. He’s been a contributing editor to BYTE and to FamilyPC.

Steve Apiki
Previous articleLooking for a PC? Have You Met Lenovo?
Next articleMicrosoft’s Vista Looms on the Horizon