MicroNet RAIDBank4 Review: Storage You Can Bank On 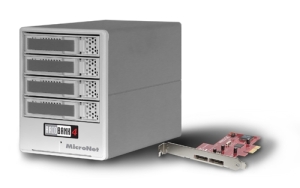 When you need to add a large amount of fast and/or protected storage to a workstation or server, the simplest way to do so is via an external RAID system. MicroNet’s RAIDBank4 is a four-drive RAID enclosure that not only offers copious amounts of capacity, but more importantly, the flexibility to configure it a variety of ways.

The RAIDBank4’s aluminum chassis measures a compact 6.5- x 4.75- x 9-inches, which makes it barely a half-inch wider than the hard drives contained within. Indeed, the RAIDBank4 takes up less desktop space than most comparable external hard drive enclosures we’ve seen, and it’s definitely transportable, if not strictly portable (you wouldn’t want to lug the 15 pound unit around regularly).

The RAIDBank4 sports both USB 2.0 and eSATA interfaces, but since the latter is still relatively uncommon on systems, the unit ships with a 2-port eSATA PCI Express host adapter along with drivers for Windows Vista/XP and Mac OS X. Micronet thoughtfully includes both full- and half-height brackets with the card, as the latter may be necessary with some compact or low-profile desktop systems. (The RAIDBank4 also includes version 3 of NTI’s Shadow backup software.)


Available in both 2 TB and 4 TB ($999 and $1,499 MSRP, respectively) versions, the RAIDBank4 arrives at those capacities using either four 500 GB or 1 TB drives. (Our test unit was the 2TB model.) MicroNet says a 6 TB version utilizing 1.5 TB drives is on deck with expected release by the end of the year, though pricing hasn’t yet been set.

The RAIDBank4 has built-in hardware-based RAID and offers more RAID options than your supermarket’s insecticide aisle. Supported RAID modes include 0 (striping), 1 (mirroring), 10 (striping and mirroring), and 5 (striping with parity).

The RAIDBank4 also supports RAID 3, which is optimized for large data transfers such as video files (RAID 3 is similar in concept to RAID 5 but stores all parity data on a single disk rather than spreading it out across all disks). You also have the option to configure the RAIDBank4’s disks in JBOD (Just a Bunch of Disks) mode to realize the full 2TB capacity without the performance or redundancy aspects of RAID.

The RAIDBank4’s SATA hard drives plug in easily through front of the device, mounted to trays that latch into place and plug directly into the backplane so you don’t have to deal with any data or power cables. The drives attach to the trays via four simple screws, and drives are hot-pluggable so you can remove and replace them without having to first power down the RAIDBank4.

Aside from a brief (and extremely loud) whoosh from the fan when first powering on the unit, the RAIDBank runs quietly and cool to the touch. (Our test unit came equipped with Western Digital Caviar GreenPower drives, which use variable rotation speed and other measures to reduce power consumption.)

You can configure the RAIDBank4 two ways. The preferred way is to plug the unit into a nearby Ethernet jack so you can access it from anywhere on the network through a browser-based administration interface. (Note: the RAIDBank4 isn’t a NAS device, as the network connection is only used for purposes of configuration or to get the status of the device.)

You can also manipulate the RAIDBank4 via a control panel attached to the back of the device, which uses four buttons and a two-line backlit LCD display. Although not quite as user-friendly as configuring the RAIDBank4 through a browser, the hardware control panel is easy to learn; it uses a menu hierarchy, which closely mirrors that of the browser user interface.

While we appreciate the convenience of the control panel, we’re a little concerned that it could allow someone to walk up to the unit and perform potentially destructive configuration changes unchallenged. Since the network-based configuration is password-protected, we’d prefer the control panel utilize a PIN code.

The RAIDBank 4’s default configuration is as a RAID 5 array, which leaves three-quarters of the unit’s capacity, or about 1.5 TB, available for storage. But you’re not limited to using the RAIDBank4 as a monolithic storage device ‑ whether you configure it through the browser or the hardware control panel, you get an enormous amount of flexibility in how you organize your storage.

Rather than sticking to the default single RAID 5 volume, we could configure one pair of drives as RAID 0, and the other pair as RAID 1, for example. The RAIDBank4 can also accommodate multiple flavors of RAID on the same physical disk, allowing the four disks to host, say, both a RAID 5 and RAID 0+1 volume simultaneously.

Similarly, the RAIDBank4 permits capacity expansion and migration between RAID types while the device is in operation. We were able to convert our RAID 1 volume to RAID 5 ‑ without taking it offline ‑ by adding an unused disk to the array. Unused disks can also be configured as hot spares, which remain plugged in but inactive unless a RAID disk fails, in which case the hot spare can automatically replace it.

Since the RAIDBank4 stores RAID configuration info both within its internal memory and on the hard drives, in the event of a system failure—as opposed to a drive failure—the drives can be brought back online by inserting them into another RAIDBank4 chassis. (Lacking a second enclosure, however, we couldn’t test the feature, called array roaming.)

Device logs on the RAIDBank4 are stored in non-volatile memory, so they’re retained even if the device loses power, and in the event of a failure or less critical issue, event notification via e-mail is supported.

While there are less expensive RAID devices that will to add 2 TB of storage to a server or workstation, we’re not aware of any that provide the same high level of configuration flexibility as the MicroNet RAIDBank4.

Joseph Moran
Previous articleHow To: Buy a Hosted PBX Phone System
Next articleIs the Smartphone the Next PC Device?