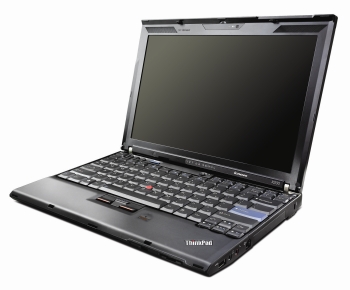 If you’ve been schlepping around a too-heavy, too-slow notebook for too long now, Intel and Lenovo have given you even more reasons to buy a better laptop. The all-new ThinkPad X200 is Lenovo’s latest “ultraportable” notebook, a three-pound hatchling that’s ready to fly thanks to the inclusion of Intel’s new Centrino 2 mobile-PC platform. If you’re constantly carrying a laptop PC with you, be it on the road or around the office, the X200 has the features and the speed to make your workday a little easier.

The X200, which replaces Lenovo’s popular ThinkPad X61, is built around a 12.1-inch screen. That gives it a footprint about the size of a sheet of paper. Its slim profile tapers from less than an inch thick to 1.4 inches, and its light weight makes it easy to tote to meetings or slip in your bag. The exterior is the now-classic ThinkPad matte black; it won’t turn heads, but it does give an appropriately professional impression.


Beauty on the Inside

While the X200’s exterior is buttoned-down, its sex appeal lurks on the inside. Intel’s Centrino 2 platform marries the latest generation of speedy Core 2 Duo processors to a faster front-side bus (1066MHz, up from 800MHz in the previous-generation Centrino solutions), which helps eliminate performance bottlenecks at the system level.

Indeed, in our informal testing, the X200 generally outperformed other ultraportables in the three-pound weight range, delivering performance traditionally reserved for larger notebooks. If you spend a lot of time away from an electrical outlet, you’ll also appreciate the X200’s battery life, which Lenovo estimates at 3.2 hours with the standard battery and more than nine hours with the nine-cell extended battery.

Beyond the speed and battery life, the X200 has other features a business pro would crave. Unlike other ultraportables, which make you suffer with an undersized keyboard, the keyboard on the X200 is full size and has the unmatched feel and responsiveness long a hallmark of ThinkPad portables. Lenovo also included dedicated volume and mute buttons (no more fumbling with a Function-key combo) as well as the handy ThinkLight: a small white LED above the screen that gives off just enough light to illuminate the keyboard in a dark room.

The 12.1-inch screen is bright and exceedingly sharp thanks to the panel’s 1280×800 resolution. The widescreen dimensions keep the height of the panel fairly squat, which makes the X200 ideal for use on an airplane tray table. You can equip the X200 with an 80GB, 160GB or 320GB hard drive or opt for a solid-state drive that uses indestructible flash memory instead of spinning platters. If you’ve ever had a traditional hard drive die on you, the allure of the solid-state drive is obvious.

With the exception of FireWire, the X200 has all the ports you’re likely to need, including three USB, a VGA connector for hooking up a projector or external monitor, modem and Gigabit Ethernet jacks, and a PC Card slot. Options include a fingerprint reader for added login security, a Webcam for videoconferencing and a 5-in-1-memory-card reader.

Lenovo also offers an optional wireless broadband radio, which lets you connect via carriers’ high-speed cell-phone networks at near-broadband speeds. If you often find yourself paying for wireless access at airports, hotels and other Wi-Fi “hot-spots,” this feature can pay for itself quickly.

While the X200 has a lot going for it, it does necessitate a few tradeoffs typical of the ultraportable class. First and foremost, you don’t get a built-in CD/DVD optical drive. You’ll have to invest in an external USB optical drive or opt for Lenovo’s “Ultrabase” accessory that adds a modular bay for an optical drive, a second battery or a second hard drive.

The small size of the X200 also means there was only room for the familiar ThinkPad TrackPoint pointing stick, not the touchpad most portable users have grown accustomed to. And the X200’s built-in speaker is fine for personal use, but if you plan to use the PC to run a presentation, you’ll want to rely on your projector’s speakers, since they are more likely better suited to conference-room duty.

But these tradeoffs can be said of most every three-pound ultraportable, and the X200 does away with two of the biggest shortcomings of previous models in this class: so-so performance and a cramped, sub-standard keyboard. Even better, the X200 series starts at a reasonable $1,199. Considering the performance and cutting-edge features, that price makes the Lenovo ThinkPad X200 a bargain to boot.