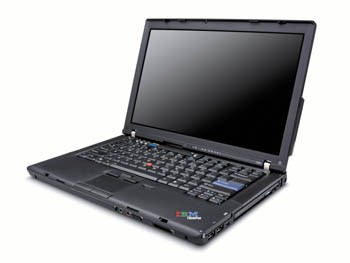 Lenovo says the Z60t is designed to be “travel-friendly” (hence the “t” in the name — a somewhat larger and heavier Z60m is also available), and while there are significantly smaller and lighter portables than this ThinkPad, the Z60t is quite compact for the features it provides.

The Z60t’s dimensions measure 13.1 x 9 x 1.2-inches, and it weighs a tick under five pounds. We tested a $2,299 configuration (prices start at around half that), which included a 2 GHz Pentium M processor, 1 GB of RAM, and a 100 GB hard disk, along with a DVD-RAM drive. It also came with a 7-cell Li-Ion battery that’s rated for up to four hours of operation; we got slightly more than three hours of life out of it.


The ThinkPad Z60t comes clad in familiar black plastic, but you can opt for a snazzier titanium notebook lid, which is certainly more durable and scratch-resistant. Whether you choose plastic or titanium, the opposite side of the lid houses an excellent 14-inch LCD display with a widescreen format that’s as useful for work-related chores as it is for watching movies on the plane (though you probably should be working).


Lenovo provides lots of ways to get data in and out of the Z60t. Along with one FireWire port and three USB ports, the unit sports a slot for SD (SecureDigital) cards and VGA and S-Video ports for output to a monitor or television, respectively.


IBM systems have been known for excellent keyboards, and this ThinkPad is no exception. The Z60t keyboard is first rate with plenty of tactile feedback, and the notebook’s width ensures that the keyboard isn’t cramped (even though it’s flanked by speakers). There’s also ample wrist rest area provided and both pointing-stick and touchpad pointing devices come standard. You also get an extra mouse button to scroll Web pages.


Networking Options Abound
Connectivity options also abound on the Z60t: it provides Gigabit Ethernet, 802.11 a/b/g Wi-Fi, and built-in Bluetooth, and there’s even a 56K modem if you’re feeling nostalgic. What makes the Z60t unique however, is its special antenna (inconspicuously mounted to the display’s right edge) with which it can access the Internet via the Verizon Wireless cellular network (using a technology commonly known as EV-DO by the technorati).


According to Verizon Wireless, the BroadbandAccess service offers download speeds averaging between 400 and 500 kbps. This claim seems reasonable given the average of 487 kbps reported by an online bandwidth test at broadbandreports.com. (Upload speeds in turn hovered around 126 kbps in our testing.)


Of course, as is the case even with cellular voice calls, your performance may vary — perhaps widely — depending on your location and conditions on Verizon’s network. Although the BroadbandAccess Internet link did feel palpably slower than a typical land-based connection, it was still speedy enough for most workaday chores like Web browsing and e-mail access.


Although the performance from BroadbandAccess will likely be a lot less than what you’d see from a decent Wi-Fi connection, it’s nice not to have to hunt for a Hotspot every time you want to access the Internet on the road. There are however, two caveats. The first is availability: though the service is available in about 50 metropolitan areas, its not nearly as ubiquitous as Verizon’s voice service, which is something to keep in mind if you frequently travel off the beaten path. Then there’s the cost — at $79.99 a month, its by no means cheap (though existing Verizon Wireless voice customers can knock that down to a slightly less pricey $59.99 with a two-year service agreement).


When a system offers so many ways to access the Internet, making sure you use the right connection in the right place can be a challenge. To make this task easier, the Z60t offers Access Connections, a utility that lets you define specific network profiles for different locations.


You can use Access Connections to distinguish between the different networks you might access over the course of a day and stipulate a preferred connection method for each (for example, Ethernet in the office, Wi-Fi at home and EV-DO everywhere else). For added convenience and security, you can also configure Access Connections to tweak certain network settings (i.e., turn off file and printer sharing) and even launch particular applications when you connect to specific networks.


Another useful feature is the Z60t’s toggle switch on the front of the unit that will summarily shut off all of the unit’s the wireless features — Wi-Fi, EV-DO and Bluetooth. It’s a whole lot more convenient than manually turning each off on those occasions when, for security or other reasons, you want to simply “cut the cord” and work.


Special Features
The more time a system spends outside of the office, the greater the risk for damage to it (and the data on it) from damage, loss, or theft. To minimize these threats, the Z60t comes with a number of security and protection features.


The most obvious of these is the Z60t’s integrated fingerprint reader, which is located just below the keyboard. Setting up the Z60t to recognize fingerprints is not terribly difficult or time consuming, and the system can be configured to recognize multiple people if you plan to share the system. You can use the swiping a finger for system access in conjunction with — or in lieu of — your Windows logon password.


The Z60t also includes several features designed to safeguard your data from prying eyes or to protect it against unexpected system failure. For instance, what notebook owner hasn’t had nightmares about the potential loss or theft of a system containing sensitive information? To forestall such a possibility, the Z60’s PrivateDisk utility lets you create one or more special encrypted disk partitions on which you can store private data. (Although Windows XP Professional provides a built-in encryption feature, it’s considerably less flexible.)


To guard against physical damage, the Z60t features an Active Protection System designed to instantaneously park the read/write heads whenever a shock is detected. (The system’s monitoring utility recognized our attempts to induce shock by dropping the unit — albeit from only about a foot off the ground and onto a carpeted surface). A Rescue and Recovery application covers data backup and restore and supports saving data to a CD/DVD, external hard disk or network drive. Incidentally, all of the aforementioned features (along with a host of other system applications and utilities) can be easily summoned by pressing the conspicuous blue “ThinkVantage” button located just above the standard keyboard.


In addition to Windows XP Professional (Home Edition is also an option), the Z60t’s comes bundled with the basic software one needs to get started: preinstalled anti-virus and firewall utilities from Symantec and a license for the Lotus SmartSuite productivity software, though it’s neither pre-installed nor included on CD — you have to download it.


The Bottom Line
Lenovo’s ThinkPad Z60t fits a lot of impressive hardware and useful software into its compact five-pound form, making it an excellent traveling companion. In particular, the Verizon BroadbandAccess service (which incidentally, you must choose when you order the notebook — it can’t be added later) will appeal to people who want Internet access on the road without a latte to go with it.


Price: $2,299 (price as tested)
Pros: Excellent display and keyboard; durable titanium lid; Internet access via cellular network
Cons: Not for the financially faint of heart; can’t opt for EV-DO down the road