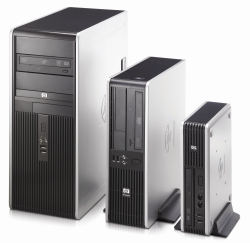 Increasing the computing options for SMBs, HP expanded its line of business computers with the HP Compaq dc7900 Business PC Series. At the same time, the company announced its latest POS system, which it designed based on input from small and medium retailers.


The three systems are available in a range of configurations that include Intel Core 2 Quad and Core 2 Duo, Pentium dual-core and Celeron single and dual core processors and 250- and 500- GB SATA hard drives. The systems also come with a host of display ports such as VGA, DVI and, most notably, DisplayPort, the new digital display standard used primarily to connect a computer to its monitor.

HP claims the dc7900’s power-saving features can also lower your operating costs. Those features include energy-efficient processors; power supplies that are up to 87 percent efficient (up from the typical 65 percent), ENERGY STAR and EPEAT Gold ratings and the HP Power Manager, a utility that lets individuals customize their computer’s power settings.

“Through our partnership with Verdiem, we’ve made it easier for small business owners to set up their own power policies,” said Morris. “For example, they can input their local cost-per-kilowatt and calculate the exact cost of various power configurations. They can also set different work and non-work power profiles. When they leave for the day, the PC automatically switches to the non-work configuration and saves on power consumption,” he said.

As part of its enhanced security offerings, HP’s dc7900 series comes with the new HP Firefox Virtual Browser. Morris described the virtual browser saying that it “corrals all your Internet browsing into a virtual layer, or sandbox, separate from your system files and data.” HP said that should your computer be attacked by malicious software, the browser lets you remove unwanted programs from the sandbox with one click of the mouse.

Other security measures in the dc7900 series include two new features within the HP ProtectTools security suite. The Privacy Manager, HP said, lets you exchange e-mails with a secure digital signature, while File Sanitizer is designed to permanently remove data from your PC before you dispose of it.

To further cut operating costs, HP offers its Total Care Green to Gold CD which provides up to $75 in services such as HP Upline, HP PowerManager and HP Recycling Services


HP expects the dc7900 series desktops will be available later this month with prices starting at $599.

“Built from the ground up.” That’s how Emily Dart, HP senior product manager described the rp3000. The company took input from small and medium retailers and designed what it calls a space-saving system to help small retailers save time and money while managing the various tasks of their business.

“The rp3000 has a very small footprint, which makes it easier for retailers to save counter space,” said Dart. “It’s been designed with color-coded ports in the back to simplify setup.” The system also uses only industry-standard technology, which HP claims makes it easier and less expensive to manage and run than other proprietary POS systems.

You can purchase the point-of-sale terminal alone, or you can buy the terminal and peripherals as an entire turnkey solution. A range of peripherals include flat-panel, touch-screen display, a heavy-duty cash drawer, keyboard with an integrated magnetic stripe reader, a free-standing credit card reader, a USB thermal receipt printer, USB bar code scanner and a customer display pole.

The actual computer system is built around Intel’s low-heat, low-power Atom processor, which, according to HP, uses less energy to run, letting you extend your business hours while still saving on energy costs.

Application software is available through HP’s relationship with retail integrated software vendors and resellers. The rp3000 comes with a three-year warranty and pricing starts at $699 (for the base system). The full turn-key solution starts at $1,600.