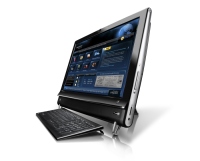 You can expect an avalanche of new-product introductions on the coattails of Microsoft’s Windows 7 launch this month, and HP has seized the occasion to debut a spate of desktop and laptop PCs aimed at small business buyers. “The release of Windows 7 presents an ideal opportunity for businesses of all types to evaluate their aging fleet and leverage the best solutions to meet their company’s needs,” said Stephen DeWitt, senior vice president and general manager of HP’s Personal Systems Group.

This is especially true for business owners who skipped the Windows Vista generation and find themselves staring at PCs that have been in service for four years or more. The debut of Windows 7 is a chance to start fresh with machines that are likely to be faster and more stable than what they are currently using.

Perhaps the most interesting of the new HP computers is the HP TouchSmart 9100 Business PC. This space-saving all-in-one desktop PC puts all the computing components behind a 23-inch, full-HD panel featuring advanced touch-screen capabilities that make interacting with Windows 7 and other applications as easy as tapping on the screen. In addition to mouse clicks, Windows 7 supports actions such as scroll, drag, flick, pinch, pan, zoom and rotate.

The TouchSmart 9100 can enhance the customer and employee experience in various business settings, such as the hospitality, healthcare, education, retail, finance and banking industries. And HP is working with software vendors to build touch-aware applications for various vertical markets.

Pricing for the TouchSmart 9100 PC starts at $1,299. the system comes with an Intel Core 2 Duo processor and supports up to 8GB of RAM. Buyers can stick with the standard 250GB hard drive or step up to a 500GB drive, and you can replace the standard slot-loading multi-format DVD burner with an optional Blu-ray/DVD combo drive.

If you’re looking for a more traditional PC, take a look at the Elite 7000 desktop. HP designed this system with the latest performance components—namely Intel Core i7 and Core i5 processors— and wrapped it in a desktop that you can upgrade down the road. The mini-tower chassis accommodates a second hard drive for up to 1TB of storage or for RAID functionality, and the optional Blu-ray burner lets you create optical discs that store up to 50GB of data.

The fully configurable Elite 7000 starts at $789, and you can customize it with up to 8GB of fast DDR3 RAM, hard drives ranging from 160GB to 1TB, two 5.25-inch optical drives and a choice of NVIDIA and ATI graphics cards.

HP also offers the Elite 7000 with Norton Online Backup from Symantec. This service safeguards data stored on networked PCs by automatically backing up files to one secure, central location that can be recovered in case of hard drive crashes or file damage.

HP targets budget-constrained small businesses with the Compaq 500B Series desktops. Designed to be easy to set up, use and expand, the 500B (starting at $359) offers a range of Intel processors, while the 505B ($409 and up) employs AMD processors. Buyers can configure the machines with up to 4GB of fast DDR3 SDRAM memory and hard drives ranging from 160GB to 500GB.

The sleek black chassis of the series features two easy-access USB ports on the front plus four more on the back. For future expandability, the mini-tower cases have room for one full-height PCI 3.2 card, two full-height PCIe x1 cards and one PCIe x16 card.

Drive expansion is limited, however, as there’s room only for one external 5.25-inch drive (which is populated with either a DVD-ROM drive or multi-format DVD burner) and one internal 3.5-inch drive. But if you need more graphics horsepower than the stock integrated graphics, HP offers the NVIDIA GeForce G210 HDMI PCIe x16 graphics card or ATI Radeon HD 4350 HDMI PCIe x16 graphics card as factory upgrades.

On the notebook front, the most interesting introduction is the HP TouchSmart tx2-1377nr. This portable converts from a traditional laptop to a tablet PC by simply swiveling and folding the screen. You can write, draw and erase on the 12.1-inch screen with the included pen, or use one or two fingers on the screen to control Windows 7.

Other new additions to HP’s notebook lineup include the $799 ProBook 6445b and 6545b. The ProBook 6445b features a 14.0-inch screen and is intended as a mobile companion, while the ProBook 6545b sports a 15.6-inch screen and is better suited to people who need a larger screen in a machine that sees only occasional travel. Both models feature AMD processors and can be configured with HP MobileBroadband powered by Gobi for accessing 3G wireless networks on the go.

The ProBook models come preloaded with the HP ProtectTools suite, a portfolio of customizable security solutions that help safeguard the PC and its data; HP also offers an optional fingerprint reader for the machines.

These ProBook notebooks also feature HP QuickLook 3, which lets you access your e-mail, calendar, task and contact information in seconds at the touch of a button, without having to boot to Windows. Similarly, the new HP QuickWeb lets you press a button and surf the Web without launching Windows.

Compaq Presario CQ61z is a mainstream notebook for SOHO buyers on a budget. With a starting price of $399 (through December 19), it includes a roomy 15.6-inch high-definition widescreen display, an AMD Sempron M100 processor, 2GB of RAM, ATI Radeon HD 4200 graphics, a 160GB hard drive and, of course, Windows 7.