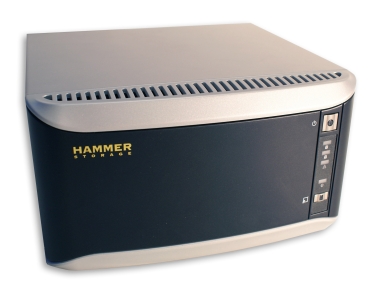 As a small business owner, chances are you have more than one computer in your home or office. When you need to share data between them (and you inevitably will), the easiest and most efficient way to do that is through a shared storage device like a NAS (Network Attached Storage) drive.

The latest entrant into an already-crowded small/home office network storage market is the Hammer Storage Myshare, a device available in five capacities ranging from 320 GB to 1.5 TB (with a 2 TB model scheduled to join the lineup in August). While it doesn’t provide everything offered by competing products, the Myshare manages to distinguish itself with an impressive feature set for its relatively modest price. (The 1 TB model we tested carries a $499 MSRP, but prices range from $299 to $799.)

The physical size of some NAS drives can rival that of a small PC, but the Myshare is fairly compact device, made possible by the fact that all models use only a pair of internal drives. So, while the Myshare can provide RAID 0 (striping) and RAID 1 (mirroring) storage modes, it can’t provide the performance and data safety balance of RAID 5 (striping plus parity), which requires a minimum of three drives. The Myshare drives are of the SATA variety and aren’t externally accessible (i.e. not cold- or hot-swappable).

The Myshare connects to your network via a Gigabit Ethernet port, which we now consider de rigeur considering how inexpensive Gigabit-compatible switches and routers have become. The Myshare also sports a pair of USB ports that can be used to connect and share additional external hard drives or flash-memory drives. You can also use the ports to share USB printers, which isn’t always found on NAS products in this price range.

Installation and Administration
Getting the Myshare connected to a network isn’t very difficult even though there’s no utility included to initially detect the device. Instead, you can locate and access the unit for the first time by entering its name via the Windows Run command (the Myshare addresses itself automatically through DHCP). It’s then a matter of accessing an administration page with your browser (which we had no trouble doing with Firefox).

The Myshare comes out of the box configured in spanned mode, which means you can access the entire capacity of both drives as a single volume. While that gives you all the storage you paid for, we think the first step for a fair number of people will be to set it up as a mirror – i.e., one drive, or half the total capacity, stores the data and the other drive is an exact copy of the first drive – which provides data redundancy (one of the main benefits of a having twin-drive NAS device).

Data folders you create are automatically set up for CIFS (Common Internet File System) access, making them accessible from either a Windows or Mac PC. You can also enable NFS (Network File System) support for folders, which allows Linux systems to use the Myshare as well. If you don’t want to set up your own users and groups on the Myshare, you can make the device part of a Windows domain and it will authenticate users against your domain membership list.

The Myshare’s user/folder management interface is easy to use and offers good online help. Except for a quick-start guide Myshare does not include a manual, but most people won’t miss it anyway. (You can download it from the company Web site if needed.)

The Myshare maintains multiple activity logs, but unfortunately you can only view them on the device itself– there’s no provision to output the logs to a computer or even to save them to a file. On the plus side, the Myshare does support alerts for error conditions in the form of e-mails or network-based pop-up warning dialogs that can be sent to up to five systems that you specify.

Device Sharing
The Myshare’s two USB ports are located on the rear of the unit and will support any mix of printers and external storage devices. One of those ports supports what Hammer calls auto-backup — when you plug in a USB storage device and press a button on the front panel, the Myshare will make itself a copy of the contents and put it in the public folder. Auto-backup can be handy, but it could also be a little easier to use — the USB ports aren’t labeled, so you need to remember which of them supports the feature (or check the manual). It also turns out that the appropriate port is sandwiched right between its neighbor and the Ethernet port, which makes it a little hard to access.

Remote Access
It’s not uncommon for NAS devices to support remote access, and most do so via FTP (File Transfer Protocol). For it’s part, the Myshare supports remote access via either FTP or HTTP, but it also gives you the option to get at your data via HTTPS (secure HTTP). HTTPS support will be particularly welcome for security-conscious people, given that both FTP and standard HTTP are inherently insecure connection methods — this means that even if you protect folders with passwords, you must transmit those passwords “in the clear” over an unencrypted link).

The process of setting up the SSL (Secure Sockets Layer) certificate and key necessary to support secure connections can ordinarily be somewhat intimidating (especially to non-technical folk), but the Myshare actually makes it a relatively straightforward process. The Myshare’s administration console provides a link that prompts you for some required basic organizational info, and then automatically generates the certificate and key and enters them into the appropriate fields for you.

Unlike many comparable NAS devices, our Myshare test unit didn’t support UPnP (Universal Plug and Play), which lets you easily stream media to compatible A/V equipment. Hammer Storage says a June firmware update will add UPnP support as well as allow the Myshare to act as an iTunes server.

One thing conspicuously absent with the Myshare is a client backup utility, which is often bundled with NAS products. Not everybody needs this software (or will even use the Myshare to back up systems), but those that do will need to factor in the extra cost.

As long as you can do without extras like bundled software and swappable hard drives, the Myshare’s large capacities, ability to share both external storage devices and printers and support for secure remote access all help make it worthy of serious consideration.