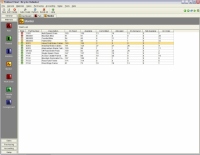 One of QuickBooks’ failings, even the higher-end Enterprise versions, is its relatively weak inventory management module.  QuickBooks does the job quite well for service-based companies, and companies that drop-ship products to their customers, but it has its limits for manufacturing firms or companies that assemble various pieces to make a complete product.

Several mid-range and high-end accounting software publishers, including Microsoft Dynamics and SAP, have built a business luring manufacturing firms away from QuickBooks.  But following that road can be very expensive, especially once your company has more than five employees accessing the accounting system simultaneously.

Enter Fishbowl, which allows companies that use QuickBooks to stick with their familiar program while hyper-charging its inventory management capabilities.  Fishbowl Inventory was one of the first software firms to get involved with Intuit’s third-party developer program.  The program was designed and written to integrate seamlessly with QuickBooks, and it shows.  Fishbowl works with the installed software versions of QuickBooks Pro, Premier and Enterprise but does not work with the Web-based versions of those titles.

Among the functions that Fishbowl performs, which you won’t find in QuickBooks, are unlimited locations, serial numbers, expiration dates and product assembly.  If you’re considering ditching QuickBooks because it isn’t doing the job for your company’s inventory management, download the trial version of Fishbowl and play with it for a couple of weeks.  If Fishbowl doesn’t have the juice you need, then look around for the $100,000 or more you’ll need to switch to a mid- or high-range accounting system.

Fishbowl, when introduced to an existing QuickBooks installation, pulls in as much data as it can, such as a current parts list, customers list, vendors and charts of accounts. If the existing data set is messy or difficult for Fishbowl to read and utilize, the company recommends that you export the QuickBooks data to Excel, clean it up and then import it to Fishbowl.  Kirk Tanner, Fishbowl’s chief marketing officer, tells us that many new Fishbowl customers purchase both products at the same time.

Once installed, Fishbowl becomes the front-end to QuickBooks.  You end up running all the product-oriented functions, such as purchase orders, receiving product into inventory, assembly, order entry, shipping and returns in Fishbowl.  Essentially any function that touches on a physical item that a company handles takes place in Fishbowl.  Statements, payroll, financial reports, checks and general ledger adjustments take place within QuickBooks.

Fishbowl updates the various inventory management functions in real time. Financial data that affects a company’s general ledger balances gets exported to QuickBooks based on your preferences; most Fishbowl customers have that set up to run at the end of the business day.

You can add or enter any record that affects an inventory item, from a customer, vendor or individual part from Fishbowl.  Each functional area has a “New” button in the top left-hand corner that lets you enter the necessary information for a new record.  These records get synced up with QuickBooks when you run your export.

One feature that makes Fishbowl extremely flexible is the capability to create custom fields, so you can tweak the program to work according to your particular needs.  These custom fields can be searchable, making it easier for you to locate an item.  You can set up inventory fields with certain constraints, such as color or size that display in drop-down menus when you’re working with that item.

Fishbowl lets you define an item’s location, which really extends QuickBooks’ functionality.  You can define an item’s location in a wide variety of ways, from a warehouse to an individual bin.  You can even pinpoint an item as “in transit.” It’s possible to group locations and also supply more detail, such as a shelf or bin number. The part details can also include lot number, serial number and expiration date.  Fishbowl tracks the history of everything that happens to an individual item while it’s in your control, from its initial purchase from a supplier through assembly and sale.

Costing an item in inventory is another tricky proposition. QuickBooks is set up to provide average costing, but Fishbowl gives you the option of four different costing methods:  FIFO (first in, first out), LIFO (last in, first out), average and standard costing.

Tracking the life cycle of an item in inventory illustrates Fishbowl’s capabilities, starting with the Purchasing module, where you generate a purchase order for an item you want to stock.  Once a purchase order is issued, Fishbowl starts to track the item, and it shows up as “On Order.”  When the item is received, Fishbowl’s Receiving module generates a receipt report for export to QuickBooks, where the vendor’s invoice is paid.

When selling, you can create an estimate as you’re building the order.  Fishbowl lets you search your inventory database by location, item, or any of your customized fields.  The program includes a Product Tree, which shows all products grouped by item type.  After you enter an order, it is sent to Picking where you can generate a list of where the items you’ve sold are currently located.

The shipping module integrates with UPS and FedEx software, which holds the tracking numbers in the system.  At the point the order ships, it’s marked Fulfilled.  Fishbowl then updates the sales order and creates an invoice that is sent to QuickBooks.  You can accept a customer’s payment within Fishbowl or QuickBooks.

On the manufacturing side, Fishbowl has a slick Bill of Materials feature, which works with sub-assemblies if you need that kind of detail.  You can put labor costs and overhead on the Bill of Materials so that it reflects the correct costs.  You can set up a standard assembly or a build-to-order assembly; the BOM module calculates the estimated cost to build a particular item.

When entering a bill of materials, you also enter the date the item is expected to be completed, which lets you run a report showing what is expected on specific dates.  BOM also lets you set up stages for building an item or process flow, which is a feature typically found on much more expensive systems.

Theresa W. Carey specializes in financial technology and has written about subjects ranging from online brokers to enterprise accounting systems for Barron’s, the Wall Street Journal, Money Magazine and many others. When not checking out programs and Web sites that manage money, she plays and coaches volleyball. Her Web site is InvestorBrain.com