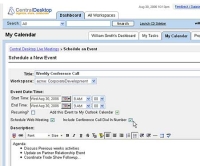 Central Desktop launched a year ago, and since then it’s grown into a respected online collaboration system. Now, with its fall 2006 release, it’s adding easy online and phone conferencing, putting it in a class above most other collaboration tools.


Central Desktop is a browser-based instant workplace that runs on Windows and Macintosh PCs. With it, you can select from a variety of templates to create shared, online spaces instantly. Employees can then generate online calendars, contact databases, task lists, project milestones and much more. The product is built on a wiki engine, and allows people to collaborate on pages the same way a traditional wiki does.


The interface lets you and your employees see which of your colleagues are online, so you can quickly pull people into an online meeting whenever inspiration strikes. Subscribers can also use the calendar tool to schedule meetings and even create recurring meetings. Invitees receive an e-mail with both dial-in and log-in instructions. Central Desktop Live handles everything on the back-end, so there’s no hassle with setting up a phone conference. You can even conference with people outside the company.


When the host launches a meeting, attendees see the host’s desktop and any applications that are open, so the host can share anything on his or her screen. Central Desktop Live doesn’t yet have the ability to share only a specific application or window — that will come in an update planned for November — so for now you’ll need to share your entire computer screen.

Central Desktop Live has several useful advanced features, like the ability to scribble notes on the screen, like John Madden using a telestrator. When typing alone doesn’t do the job, you can jot notes on the screen about the subject matter. The host can also share the presenting job with one of the attendees, letting that person control the applications on the host’s computer.


Central Desktop Live doesn’t yet work with Macintosh computers, but that will also come in the November update.


Other new features with this fall 2006 Central Desktop update include the ability to mark items “For Internal Use Only.” This should help for teams that want to open up their resources to outside partners, but don’t want to share confidential information.


Central Desktop also has a new online database tool for storing spreadsheet content, which means you can now import content directly from Microsoft Excel. While it can’t compute equations, it does allow you to identity field content types.