Many small businesses rely on a handful of PCs to store and share access to data. Sooner or later though, most will seriously consider the purchase of a server after discovering that peer-based file sharing, while inexpensive and easy to set up, can quickly become unwieldy, inefficient and risky.


It’s at this point that things often get really complicated, because the default software choice for most companies, Microsoft’s Windows Server, is expensive to buy, complicated to install, and both expensive and complicated to keep up and running day in and day out.


Windows Small Business Server uses bundling and wizards to reduce some of the initial cost and complexity of server setup, but cheaper and easier still doesn’t mean cheap and easy. Moreover, while Windows Server is capable and powerful it includes a lot of bells and whistles — such as Web server, remote access and clustering capabilities — that many small businesses simply do not want or need. It’s precisely this over-abundance of features that makes the operating system so byzantine and difficult to keep up and running smoothly (e.g., not updated against the security threat du jour). 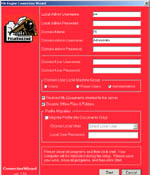