An Introduction to Windows Vista: Part 3 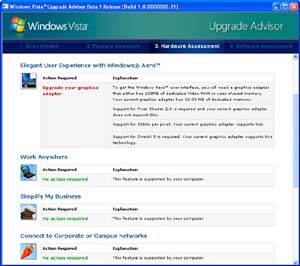 If you’ve read part one and part two of this three-part series, you already know that Windows Vista is on the horizon and that it sports a number of useful features for a small business. But even though Vista is still at least six months away, if you envision Microsoft’s new operating system in your company’s future — whether your plans include upgrading your existing computers or buying new systems in advance of Vista’s release — now is the time to start preparing.


That’s because the move to Windows Vista may be somewhat more complicated than the move to XP from one of its predecessors. In the past, the ability to run the latest version of Windows depended mainly on having a certain level of processor speed, RAM and free hard drive space under the hood. Windows Vista is the most hardware-intensive version of Windows to date, so while these components are still extremely important, they’re not necessarily the whole story because of two important factors.


First, some of Vista’s new features depend on the presence of hardware other than the aforementioned major system components. Second, not every feature is available in every version of Vista. Ultimately, the specific feature or features you want will likely dictate the version of Vista you need, and in many cases may even preclude the option of upgrading an existing system.


More Complex System Requirements
Because of the various new features and the myriad versions of Vista, its system requirements aren’t quite as straightforward as with past versions. For Windows XP and its antecedents, the system requirements basically boiled down to two levels — minimum and recommended levels.


More processor power and memory made Windows run faster and more smoothly, but as long as you as you met the minimum requirements, you could generally do the same tasks (albeit slower) as a system that was loaded to the gills with gobs of the latest hardware. Things are more complicated now, and even having just bought a system, say, in the past six-to-12 months doesn’t guarantee complete compatibility with all versions of Vista. For that matter, a system you go out and by this afternoon won’t necessarily work with every Vista feature.


Vista’s minimum system requirements are significant but still relatively modest. They consist of a “modern” 800 MHz processor (that five-year-old 800 MHz Pentium III may not be quite up to the task), 512 MB of RAM and a 20 GB hard drive. Systems that meet these criteria can run Windows Vista Basic and rate as Windows Vista “Capable” by Microsoft.


But that’s just the beginning — more importantly, PCs must have a graphics subsystem that supports certain DirectX capabilities — specifically, the ones that Vista’s Aero interface uses to provide its translucent menus and other visual effects. Premium Ready systems must also sport specific amounts of graphics RAM (anywhere from 64 to 256 MB, depending on your display resolution).


The problem is that many PCs with integrated chipset-based graphics — as opposed to discrete graphics processors on the motherboard or an expansion card — may not satisfy this requirement (and you thought graphics was only important for games). Therefore a graphics upgrade may be needed to use the Aero interface with an existing system, and if your notebook’s graphics hardware isn’t compatible with Aero, you’ll either need to do without it or get a new system.


Even as we write this, Vista is very much a work in progress (Microsoft recently released Beta 2) with system requirements that are still subject to change. For a complete listing of Vista’s current requirements, consult Microsoft’s Windows Vista Web site.


Upgrading Systems
If you’re considering putting Vista on existing system, Microsoft has developed a tool that may be of some assistance, though it’s still in beta and is arguably as much a marketing tool as an aid to consumers. Called Upgrade Advisor, this utility lets you pick from among eight categories of features and then recommends a version of Vista based on your choices.


It will also scan your existing Windows system (XP only) to tell you which hardware and software aspects of your system may be incompatible or may need an upgrade. Upgrade Advisor’s usefulness is somewhat limited — the categories are too general, it doesn’t tell you how or where to obtain upgrades, and it can sometimes be misleading (it will recommend upgrading a notebook’s graphics adapter, which is impossible to do.) Still, it can provide a general sense of which components may cause problems or help determine whether an upgrade is practical.


Special Considerations for Portables
As we’ve outlined earlier in this series, some of Vista’s most innovative and useful features rely on specific hardware components even beyond the four core components: CPU, RAM, hard disk and graphics. Alas, because of their inherent limited ability to be upgraded, if you want to take advantage of certain portable-oriented Vista features you may find yourself in need of a new computer.


A perfect example is Windows SideShow, which will let you quickly access important bits of data like contacts, schedules, etc., via an auxiliary display on a notebook computer even if the system is off. Adding such a display to an existing system obviously isn’t feasible, so you’ll need a new system with one built-in to take advantage of SideShow. While SideShow-compatible systems aren’t yet available as of this writing, you can bet they will be at or about the time Vista ships.


Another hardware-dependent Vista feature is BitLocker drive encryption. Though technically it will work on any Vista-compatible system, computers lacking a TPM (Trusted Platform Module) security chip will require a USB Flash drive to store the user’s encryption key.


Without this key, access to the system is impossible, and storing it on an easily misplaced flash drive can potentially cause problems (especially if it’s lost on the road). As it turns out, some notebooks (including several Lenovo ThinkPad models) already have TPM chips built-in, but there’s another wrinkle with BitLocker — you can only get it in the Enterprise or Ultimate versions of Vista.


The Bottom Line
As you can see, whether you’re talking about a desktop or notebook, an older system, one you just bought, or a model still on store shelves, it’s ability to satisfactorily run Windows Vista will ultimately depend on which features your small business needs to exploit.


Whether you plan to buy new PCs, upgrade old ones or perhaps a combination of both, you’ll need to be sure which version of Vista has the features you want, and that your system hardware can support it.


If you’re in the market for new computers now and don’t want to wait for PCs with Vista pre-installed to arrive, check the specs carefully before buying and look for systems that carry either Vista Capable or Premium Ready designation — preferably the latter. The designation should be in the product literature and/or on the system). Finally, when choosing a system, it never hurts to exceed Microsoft’s recommended system configuration.


Part 1 looks at what Vista will offer small business when it finally arrives.


Part 2 looks at the new or newly improved features that could help your small business perform and produce more securely.