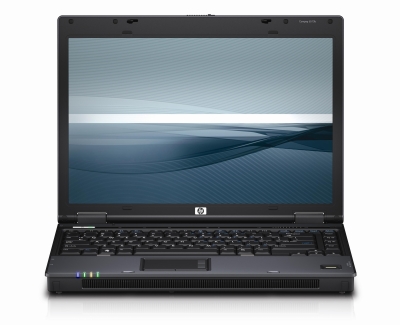 If you need to get work done on the road (and we mean real work, not just firing off a handful of terse e-mails) then you need more than a trendy smartphone or PDA. More likely, you’ll need a solid notebook to really get stuff done, and if your productivity is paramount, HP’s new Compaq 6515b business notebook gets the job done.

The drab gunmetal gray exterior of the 6515b belies what you find under the hood. HP offers a myriad pre-configured models (but alas, no build-to-order option on this line) with prices starting at $649, but the underpinnings of our test unit included Windows Vista Business — XP Professional is also available — a dual-core AMD Turion 64 X2 CPU, 2 GB of RAM, a 120 GB hard drive and a rewritable, dual-layer DVD, all of which pushed the as-tested price to a still reasonable $1,599. (Our test configuration wasn’t available for purchase on HP’s Web site at press time, but a company spokesperson said it would be by early May.)

With dimensions of 13.3- by 9.5- by 1.3-inches and weighing in at nearly 5.7 pounds, the 6515b isn’t the leanest notebook around, but neither is it inordinately large or heavy for a notebook with its features. The 6515b is powered by a Lithium-Ion battery HP rates for three hours and 19 minutes under typical conditions, and you can choose to buy one of several extended-life batteries.

All 6515b models come with a 14.1-inch widescreen display that probably won’t give the guy sitting next to you in coach a case of screen envy, but it’s plenty spacious for workaday chores, and its standard 1280 by 800 resolution (WXGA) won’t leave you cross-eyed after extended use. Our unit had a standard anti-glare display, but HP offers a more luminous HP BrightView version as an option.

The keyboard on the 6515b is comfortable and expansive (a fringe benefit provided by the notebook’s widescreen format, and the built-in pointing device is a touchpad with an integrated scrolling area. A strip of indicator lights just above the keyboard double as touch-sensitive buttons. This is a nifty feature that lets you quickly access frequently used settings like speaker volume and for turning the wireless components on and off without needing the awkward Fn+keystroke combinations many notebooks require for such tasks.

Networking and Connectivity
For Internet access the 6515 provides the requisite Wi-Fi (801.11g a/b/g and draft-N are all supported), but if you’d prefer not to limit your connectivity to hotspots you can outfit the 6515b with one of two Wireless WAN modules. Ours came with EV-DO courtesy of Verizon, but you can also opt for an HSDPA module that will work with AT&T/Cingular service. In either case, although the hardware is integrated into the notebook, you must purchase the actual service separately.

Except for a standard VGA port for an external display, the 6515b lacks any legacy input/output connectors. Along with a Cardbus slot, the 6515b sports a single FireWire and four USB ports (two on each side), which should easily accommodate the expansion needs of most people. We would have preferred a higher-performance ExpressCard slot, but we understand the choice of a more established standard for a corporate notebook. The 6515b also includes a built-in media card reader that works with pretty much every memory format except CompactFlash.

Security
When you fill a business notebook with all kinds of important and potentially sensitive information, keeping that information secure is not a trivial concern. To help put minds at ease, the 6515b sports a Trusted Platform Module (TPM) 1.2 chip along with a suite of security features dubbed HP ProtectTools. The most obvious security feature is the 6515b’s integrated fingerprint scanner, which you can use in lieu of or in addition to a standard password.

The 6515b’s TPM chip endows the notebook with hardware-based encryption for the entire contents of the system, though we couldn’t use it because our early production unit lacked the necessary software to enable the feature. (According to HP, some early shipments of the 6515b also lack the software, but it will be made available to customers as a free download at HP.com by the end of April).

It’s worth mentioning that since the 6515b ships with Vista Business, using Microsoft’s BitLocker hard drive encryption isn’t an option, because Bitlocker only comes with Vista’s Enterprise or Ultimate versions. (Incidentally, HP officially supports Vista Enterprise –which you can only get as part of a corporate volume license — even though it’s not available pre-installed.)

To help manage lots of user credentials for different applications and Web sites, the 6515b includes a handy single sign-on (SSO) feature that can store user names and passwords and automatically submit them when you attempt to access the relevant program or page.  There are only a handful of predefined applications and sites included, but you can add your own fairly easily — it worked well when we used it to automate access to a bank site as well as to Google Gmail and Yahoo Accounts. HP’s SSO feature can save a lot of typing over the course of a day, and it keeps your stored credentials encrypted, which is far preferable to caching your credentials within an application or via Web site cookies, which are of course unencrypted.

All in all, the HP Compaq 6515b is well equipped to be a road warrior’s workhorse, with a solid mix of features that won’t weigh too heavily in your travel bag or on your wallet.