A Dash of Spice for Your Network 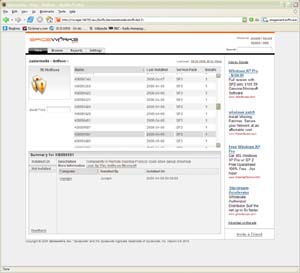 For some people, an application named Spiceworks might sound like an adult-oriented business productivity suite. But behind its slightly lascivious name lies a product designed to handle something decidedly dull: IT network management.


Network management software has earned a reputation as being both costly to buy and complicated to set up and use. As a result, many smaller organizations tend to forgo it, filing it under “nice to have, but not worth the expense or hassle”. But network management can be a lot like a visit to the dentist — you can put it off, but in doing so you risk letting a potential problem go unnoticed, or even grow worse over time.


Spiceworks (from a company of the same name) hopes to convince more small businesses to embrace network management by addressing the price and complexity obstacles. The easy-to-use Spiceworks application, which is still in a public beta but scheduled for a late October release, can inventory your network’s systems and software (along with various other devices) and also includes monitoring and reporting capabilities too. But what’s most noteworthy about Spiceworks is it’s cost — or more to the point it’s lack thereof — because it’s entirely free (though there is a slight catch that we’ll get to shortly).


Starting Out
Spiceworks is a relatively small download (about 7MB) that’s available on the home page of the company’s Web site . The software runs on either a Windows XP Professional (with SP2) or Windows 2003 Server system, but it can detect Windows 2000/XP, Mac OS X and Linux/Unix machines.


Spiceworks will please those who aren’t read-the-manual kind of people because it doesn’t have (or need) one. In fact, the sole product documentation is an FAQ that consists of a couple of dozen entries.


Many network management applications also require you to install software agents on every system to provide control and query capabilities. One of the nice things about Spiceworks is that it doesn’t rely on such agents. Instead, the software gathers its data entirely though the remote administration capabilities of the WMI (Windows Management Instrumentation) interface that’s built into Windows 2000/XP. (In the case of Linux or Unix-based systems, it uses SSH, or Secure Shell.)


You need to install software on only one system, which makes configuring Spiceworks fairly simple in most cases. During setup you’re prompted to answer a few questions such as what IP port you want the software to communicate through and what administrative account you want to use to log into remote systems.


Within a few minutes of downloading and running the software, Spiceworks is ready to scan the network. The initial scan can take up to 45 minutes depending on how many devices you have (While Spiceworks is designed for networks with 250 or fewer devices, the company says it will also work on larger networks, albeit at reduced performance).


Gathering and Viewing Data
Spiceworks displays all of its information within a simple browser-based interface. Its default setting presents an overview of your network that’s organized by category, displaying how many workstations, servers, printers and miscellaneous devices it detected (along with other network information). The program offers lots of ways to view your network data, allowing you to browse for particular items or to drill down through a particular device, selecting different device categories via a tabbed interface.

Spiceworks also reports all of the Microsoft software, services and operating system updates (a.k.a., hotfixes) present on each of the systems it finds, and we especially like the supplemental information it provides in these areas. For example, each hotfix record contains a link to the corresponding knowledge-base article on Microsoft’s support Web site, and when looking at services you can click to automatically conduct a Google search on them. Software entries include a link to the manufacturer, assuming Spiceworks recognizes the application.


Spiceworks successfully located and identified most of the devices on our test network (which included a Windows Server, network printer and multiple Windows and Linux clients), although it failed to recognize a couple of non-PC devices — namely, a wireless print server and a NAS drive. If all of your systems use the same administrator account username and password, specified during initial setup, they should all be identified without any additional configuration. If your systems use a variety of administration account, and the account you provided is invalid for a particular system, Spiceworks will flag it as unknown. You can correct condition by specifying additional accounts for your network.


By default, Spiceworks scans the entire subnet of the system it’s installed on, but you can add additional address ranges or individual IP addresses to be included in — or excluded from — the scans. A current limitation of the interface is that there’s no way to edit entries in any of these categories, so modifying an entry involves deleting it and then creating it anew. (The company says it’s in the process of remedying this.)


Monitoring and Reports
One of the trade-offs of not using agents is that Spiceworks isn’t equipped to remotely modify systems, only to poll them for data. This means you can’t use Spiceworks to modify or install an update to a remote system, for example, but for most small companies this probably isn’t high on the shopping list.


The lack of agents also precludes keeping in constant contact with systems, so real-time monitoring isn’t an option. Nevertheless, you can configure Spiceworks to scan the network at regular intervals ranging from daily to as often every 30 minutes. You can also choose from three different scan speeds. While slower scans obviously take longer, they use fewer system resources, which can be helpful if you’re running Spiceworks on a client system and want to also use the system for other tasks.

Spiceworks also helps you sift through lots of network information with a built-in report generator. You can choose from a handful of pre-defined reports (i.e., find systems with low disk space or find all printers) or design your own report by using any of the roughly two-dozen parameters. The software lets you save reports as either Excel or PDF files. It also lets you define network monitors to notify you in case of certain network events, such as when a system’s running low on disk space, it’s anti-virus definitions aren’t up to date or a particular application has been installed or removed.


Do You Want Ads with That?
Whenever a product is available for free it’s usually a safe bet that some sort of advertising is subsidizing it, and that’s the case with Spiceworks. Simply put, the company offers its product at no charge since it plans to earn revenue from another source — specifically, the Google Adwords text advertisements that occupy the right-hand side of every Spiceworks page. SpiceWorks actually makes no mention of this on their site, so you don’t know about it until you’ve actually installed the software.


As is typical of Adwords, the ads embedded into Spiceworks are context-sensitive and are based on the information Google has gleaned from the page data (you’ll likely see an ad for ink or toner when looking at the printer page, for example), so they change from page to page. (In at least one case, however, the ads were bizarrely irrelevant, all having to do apartment rental and florists in Harrisburg, Penn.)


In any event, the Google ads don’t dominate the page and are no more intrusive than they’d be on any Web site. Although some business owners may not be entirely comfortable with ads being generated from their network info, most people shouldn’t find the ads overly distracting, and some may even find them useful. (The company says that it has no plans for a paid version of the software that’s not supported by ads.)


As far as your network data is concerned, Spiceworks says that it’s all stored on a local database, as are all the account credentials you provide (the latter in encrypted form) and none of it is uploaded to Spiceworks or any third-party.


Bottom Line
Spiceworks seems to successfully apply a new business model to an old problem with a product that’s free, capable and easy to use. The product has a few rough edges (after all, it’s still in beta), and it won’t give you the bells and whistles of a conventional network management application, but if you’re looking for a way to take stock of your network with a minimal time (and no financial) investment, Spiceworks is the way to go.