A Buyers’ Guide to Business Projectors 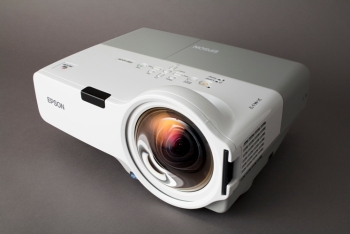 You no longer need a flush, corporate-sanctioned budget in order to afford a portable business projector. Today, you can find a good projector for as little as $500, with more powerful and full-featured models hovering in the $1,000 to $1,500 range. When you consider that an entry-level model cost $1,500 a couple of years ago, you can see why it’s worth taking a look.

“The projector industry is changing rapidly, and the market is growing,” says Mike Isgrig, Director of Epson Projection for Epson America Inc., one of the industry heavyweights. “The pricing has come down quite a bit, so projectors are a lot more affordable for a small-business entrepreneur.”

This lets more first-time buyers into the game, and it also allows larger organizations to equip more employees, rather than having a limited loaner pool. “As prices come down over time, the projector will become a personal device, not a shared one,” predicts Isgrig.

Projectors also aren’t just about displaying static slides and pie charts anymore: Web sites and video are now the norm, thanks to software tools like PowerPoint 2007 and Apple’s Keynote, which make it easier to create media-rich presentations. “You can express your ideas in a much more persuasive manner,” says Isgrig. “When people see images rather than text, studies show their recall goes way up.”

So for any business owner that needs to sell — be it a product or an idea — a projector is an essential tool. Here are the features and specs to consider when weighing your purchase.


Brightness
Brightness, or the amount of light a projector can produce, is arguably the most important spec to look at when comparing projector models. The more light an engine puts out, the more likely you are to be able to present a decent image even in a room that isn’t completely dark.

Fortunately, major projector makers adopted one industry standard for reporting the amount of light a projector delivers to the screen, measured in lumens. You’ll see the spec quoted as ANSI lumens (for the American National Standard Institute); while the rating doesn’t indicate how good an image will be, it does at least put all units on a level playing field when it comes to measured light output.

As a rule, a unit with a rating of 1,000 to 1,500 ANSI lumens is acceptable for use in an office or small conference room where you can control the light coming from windows and overhead sources. But if you typically present in a larger conference room, or in a room where you can’t dim the lights and close the shades, you’ll want a unit in the 2,000 to 3,000 ANSI lumen range.

Brightness uniformity is another important specification, as it indicates how consistent the image brightness is when measured in the center and at the corners. Ideally, a projector will have a brightness uniformity rating of 90 percent or better; a low figure is a warning that the center portion of the image will be noticeably brighter than the edges. Of course, manufacturers are not required to divulge this spec, so if a unit has poor uniformity, you won’t see that rating listed in the specs.

Size and Weight
As with a notebook PC, another decision is what size machine you need. Ultra-portable projectors (that is, models weighing between 2.5 and 4 pounds) are the right choice for a road warrior who needs a presentation device with her as a near-constant companion. As with a notebook PC, miniaturization costs: An ultra-portable model will typically run a few hundred dollars more than a larger unit with similar (or better) specs. But if the device and its accoutrement will be slung over your shoulder as you schlep through airports, every pound counts.

If you use the projector mainly in your office or a meeting room, with only an occasional road trip, consider a projector in the 4.5- to 7-pound range. You’ll generally get a brighter image and more features for your dollar.

Resolution
As with any display device, the sharpness and clarity of the picture depends largely on the number of pixels that comprise it. Portable projectors predominantly come in two native resolutions: SVGA (800-by-600 pixels) and XGA (1,024-by-768 pixels). The more pixels, the more detailed the image.

Many people will be well served by an SVGA projector. The typical PowerPoint presentation and even video will look fine, and you can find a good model for as little as $500. However, if your agenda includes displaying Web sites and text-heavy applications (such as Excel spreadsheets or Word docs) opt for a higher-resolution model. You will be able to display more of a given document or Web page without scrolling, and smaller text will be noticeably easier to read.

As with laptop screens, projectors now come in wide-screen 16:9 formats. These WXGA (1280-by-800) projectors are more expensive than XGA models, but might be preferable if you present video content created in 16:9 format — or if you plan on using the unit as a home-theater companion after hours (we won’t tell the IRS if you won’t). But for the vast majority of buyers, the traditional 4:3 aspect ratio is the way to go.

Jamie Bsales
Previous articleMicrosoft: How Does ‘Free’ Sound?
Next articleSee Me, Hear Me: Videoconferencing You Can Afford