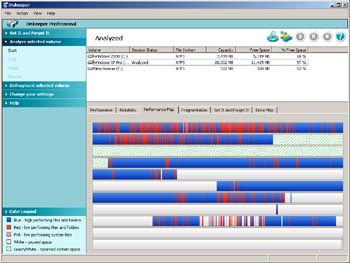 naRemember how well your computers performed right after you installed them? You could access Web pages rapidly; word documents loaded in moments, and life was good. But after a year or so, things tend to slow down.

It’s a fact of life that Windows-based computers tend to gradually lose performance over time. The question is what do you do about it? This article gives a few tips on how to speed things up again. You might not reach the level of a brand new machine, but you can get real close.

PCs in Pieces
One of the primary reasons for poor PC performance is a disease known as fragmentation. This is caused by the basic design of Windows. While writing and deleting hundreds of files each day, a PC rapidly scatters file fragments into whatever available hard drive space it can find. This saves time that would otherwise be spent locating blocks of free space large enough to accommodate intact files.

In order to make data retrieval possible within a fragmenting file system, every file has a header that gives the location and size of each fragment. While this system simplifies writing to a disk, it divides documents into thousands of pieces.

Unfortunately, for each fragment that exists, the computer has to do extra work to recompile all the pieces, which causes those long, annoying delays before a file appears.

How fragmented do files become? According to a random study by the American Business Research Company (Anaheim, Calif.) of 100 small-to-large companies that did not defragment their systems, the levels of file fragmentation were quite severe.

Fifty-six percent of NT/Windows 2000 workstations had files that had been fragmented into anywhere between 1050 and 8162 pieces. One in four companies reported finding files with as many as 10,000 to 51,222 fragments. In all cases, fragmentation exerted a heavy toll on performance.

How does fragmentation affect PC performance? According to tests conducted by, the National Software Testing Lab(NSTL) &#151 a hardware and software testing firm of Conshohocken, Penn. &#151 disk fragmentation slows Windows NT/2000 workstations and servers by anywhere from 20 to over 220 percent.

Try this test. Go to the Start Menu and hit Programs, Accessories, System Tools and Disk Defragmenter. Click the Analyze button on the bottom left of the screen. I had one file in 2724 pieces and another with over 400. That analysis, though, is about the only useful information you’ll get from the defragmenter that’s built into Windows 2000 and Windows XP.

When I began this article, I initiated a defrag using the built in tool. My computer thrashed around for hours before it finally completed the task. And that badly fragmented file still has 2724 pieces. It’s just an inefficient piece of software that was designed for a time when hard drives were much smaller. It’s also a pain to use if you have to defrag more than two or three desktops.

According to an analysis by IDC, the Windows built-in defrag utility has to be run manually, which makes it far too expensive to use in terms of the admin time involved. In a small company with just one server and ten workstations, for example, it would take 572 staff hours per year at a cost of $25,168 to manually run the utility on each machine.

IDC recommends an application such as Executive Software, Inc.‘s Diskeeper, a tool that not only lets you schedule regular defrag sessions, but also lets you install and set schedules over a network. It costs a small business $19.95 per PC.

“A growing number of people know that fragmented files on disks cause an overall degradation in system performance,” said IDC Senior Research Analyst Frederick W. Broussard. “Even though the actual numbers may vary from customer to customer,” Broussard continues, “when considering the significant impact on Total Cost of Ownership, it is difficult to find any argument to position the manual defragmenter over automated, network defragmentation.”

The Startup Standstill
It’s an unfortunate fact that many applications insert themselves into a PC’s system tray to run whenever the system starts up, which results in a sluggish PC.

Look at all the icons down at the bottom-right corner of your screen. Click on the little arrow to see the hidden icons. Everything in the system tray runs whether you want it to be or not &#151 instant messaging, anti-virus, etc. And there may be dozens of other programs running that you aren’t aware of. But you can fight back.

AutoStartManager, a free program by Bleu Canard Software,finds them all. It tells you exactly what applications run when you start your computer and lets you delete applications from your Startup Group This tool allows you to see them on one screen, and enable or disable them.

Whenever you install a new application on your PC, for example, it’s typically set up to load upon start up. Yet if you only use the program once a month, that application still consumes valuable system resources every day. Similarly, if you normally use a laptop at your work desk, but you’re about to travel away from the office, you may want to disable all these tools that make sense when you’re connected to the company’s network, but only slow down your computer when you’re away.

Do You Want Some Cache, Man?
A cache is a special area of memory that speeds up data transfer by storing frequently used and recently accessed data so it does not have to be reread from disk. CachemanXPby Outer Technologies is designed to improve the performance of your computer by optimizing several caches, and fine tuning a number of system settings. It only runs on Windows NT4/2000/2003 or XP.

Basically, at start up, your memory resources begin to dwindle as more and more applications start running. Hit Control-Alt-Delete to see your Windows Task Manager. The Processes Tab shows you all the many applications that consume valuable memory. Eventually, you end up staring at a frozen screen for up to a minute at times until Windows finds more memory.

CachemanXP frees up memory for your PC rapidly, so you don’t have to wait until the system to get going again. Also, the way Windows deals with a memory problem often consumes way too many resources. CachemanXP eliminates many needless slowdowns when you changing from one program to another and the long pauses between recovery operations. A wizard interface helps you change settings in the Windows XP file system that can noticeably improve system speed. The program costs $25 per PC.

Complete Reinstall
Some people make a habit of reinstalling the Windows operating system every year as a way of making their PCs hum. Yes, that does make a difference. But it’s a big hassle. A better approach is to make regular use of the above tools. Defrag, in particular, if set up to run automatically each day will keep XP going and going and going. It’s the best way I know to add a couple of years to the life of a PC.