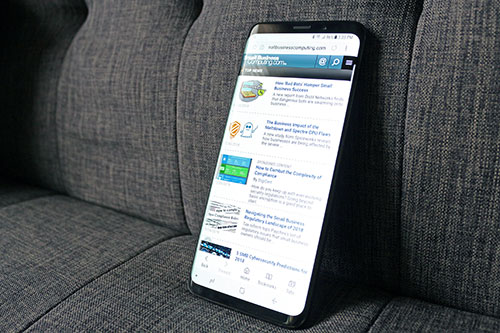 Samsung’s new flagship phones for 2018 are here. But what does that mean for entrepreneurs and small business owners that rely on their smartphones to conduct business?

Here are some observations after using a Galaxy S9+ for a few weeks.

One would be hard-pressed to tell the difference between the Galaxy S8+ and S9+ at first glance. This is not a bad thing, considering that the S9 builds on a great design introduced by its predecessor.

In short, it’s still a sleek, premium-looking Android device that nobody will be embarrassed to be seen using, even with the Apple X’s practically bezel-less phone having become the poster child for nearly borderless screens (divisive “notch” notwithstanding, of course).

There are differences, but you would have to look hard to spot them. Located in the back is the fingerprint reader, which was awkwardly offset in the previous model. Now, it is centered with the camera for a more ergonomic experience. The top bezel also does a better job of hiding the phone’s many sensors in all but the brightest daylight.

Similarly, the Galaxy S9+ features a vibrant OLED screen that is a sharp, vibrant canvas for all types of apps. Although it impresses with photos and videos, even humble web browsers and productivity apps look great with crisp text and ample room for menus and navigational elements.

It helps that the Galaxy S9+ boasts a 6.2-inch screen that appears to cascade down the sides. It is 0.4 inches larger diagonally than the standard S9, but both have a resolution of 2,960 pixels by 1,440 pixels.

Powered by Qualcomm’s newest Snapdragon 845 processor, an eight-core chip running at up to 2.8 GHz, Samsung’s Galaxy S9+ can handle any app thrown at it. The phone ships with Android 8 “Oreo,” the latest major release of Google’s mobile operating system.

The home screen appears in a flash, and most apps load up in a snap, although more demanding apps may take a few moments to load. Geekbench 4.2 scores of 2,437 single-core and 8,224 multi-core on this pre-release example place it at the top end of the Android phone rankings, according to the benchmarking app. Even higher scores are attainable, according to some tests that surfaced before it hit store shelves.

Both the Galaxy S9 and S9+ feature 64GB of onboard storage, which is expandable with a microSD card (up to 400GB). The S9+ has more RAM than the 5.8-inch S9, 6GB versus 4GB, a boon for multitaskers that frequently jump between apps or run them side-by-side.

Users will have no trouble running business apps like Salesforce or Microsoft’s Word, Excel and PowerPoint. Of course, even the best smartphone displays and high-performance mobile chips can’t beat a desktop when it comes to some application experiences that would benefit from a big monitor, keyboard and mouse.

Like the DeX Station, the accessory allows folks to use their smartphones with a monitor, keyboard and mouse, creating an expansive desktop experience that makes working with massive spreadsheets and busting-at-the-seams inboxes a breeze. Pair it with a virtual desktop infrastructure (VDI) platform like Citrix or Amazon WorkSpaces, and it can be used to access virtual Windows desktops. 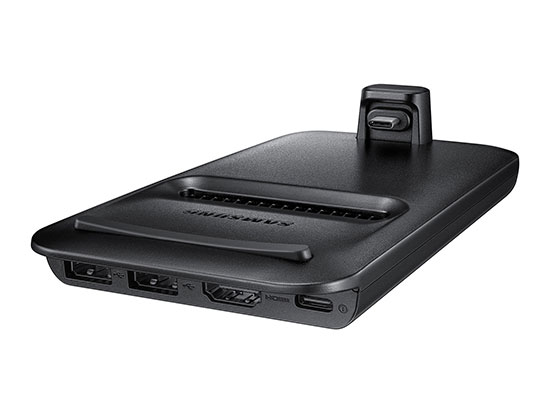 Whereas the DeX Station propped up the phone in a nearly vertical orientation, the Galaxy S9 and S9+ lays horizontally atop the DeX Pad. This allows it the phones to double as a touchpad, a handy feature if there’s no mouse to be found.

The improved DeX accessory does come with one downside. Although it still features a cooling fan along with USB-C, USB 2.0 and HDMI ports, it ditches the Ethernet port, meaning that users will have to rely on the phone’s Wi-Fi or cellular components for network connectivity.

Pictures and video captured with the dual-camera configuration in the Galaxy S9+, are sharp, crisp and packed with detail, even in low lighting. The device’s wide-angle and telephoto cameras, both packing 12 megapixels and featuring optical stabilization, can capture business cards, crumpled receipts, whiteboards and documents with amazing clarity.

A new trick, called Super Slow-mo video can turn 0.2 seconds of footage into 6-second clips. Sure, it’s great for capturing your pet’s cute antics, but it is also useful for studying and diagnosing malfunctioning parts and studying other blink-and-you’ll-miss-it events.

During weeks of testing, the S9’s 3500mAh battery lasted a full day of making calls, using a smattering of apps, and snapping pics and videos, all with the always-on display mode enabled. This mode shows the date, time and select app status update on the phone screen, albeit dimmed, while the phone is inactive.

Although the Galaxy S9+ does a lot of things right, including not abandoning the headphone jack, there are some shortcomings.

First, it’s a smudge magnet. It collects fingerprints like a crime scene investigator. Worse, the phone’s practically seamless exterior makes it a slippery slab to handle, so a case is a must.

In one heart-stopping moment, it flew out of a pocket on my laptop case while I was going through airport security, hitting the hard floor after a drop of a few feet. Luckily, it emerged largely unscathed with the screen completely intact, with the exception of some minor scratches on the metal band that encircles the phone.

Bixby, Samsung’s answer to Apple Siri and Google Assistant, could still use a little more work. That said, it is much more helpful than when it first debuted in 2017, and its assortment of augmented reality capabilities, called Bixby Vision, are promising.

Bottom line: The Galaxy S9+ is a powerful work companion for Android users who want the look, feel and performance of a premium device. Prices start at $840 for an unlocked phone directly from Samsung. Carrier promotions and incentives may yield bigger savings.