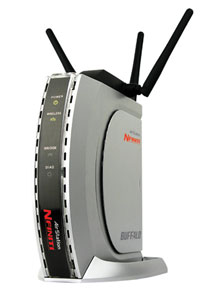 “Draft N” wireless network gear such as the Nfiniti products from Buffalo Technology, which are available in stores today, offer a somewhat dubious value proposition. You get faster wireless networking and wider coverage now — theoretically — but run a risk that the equipment you buy will never comply with the final 802.11n standard and will never interoperate with other 11n equipment.


The 802.11n standard increases the theoretical maximum speed of a fully standards-based Wi-Fi network from 54 Mbps (under 11g and 11a) to 540 Mbps. It uses the 2.4 GHz band and is backward compatible with Wi-Fi 11g and 11b. To the existing standard, 11n most notably adds MIMO (multiple-input multiple-output) technology, which uses multiple transmitter and receiver antennas to increase data throughput and network range. One of the first things you’ll notice about 11n routers is that they have three antennas rather than one or two.

But the IEEE (Institute of Electrical and Electronics Engineers), the standards body that developed the Wi-Fi standards, has yet to ratify a final version of 802.11n, and interoperability testing — a hugely important part of the process — has not begun.


The theory is that vendors will be able to upgrade Draft N gear to full compliance with the final standard later by simply updating device firmware. The risk part of the Draft N value proposition — the possibility that it will turn out that vendors won’t be able to upgrade these products to full compliance — is difficult to gage at this point. The consensus seems to be that the risk is small, but there.


Buffalo, for example, is reportedly on record as saying it doesn’t absolutely guarantee the Nfiniti products will be fully compliant. And you can bet that no vendor of Draft N equipment is offering to replace products if it turns out they can’t be upgraded to full standards compliance. Linksys, Netgear, Belkin and others are also in this market.


What about the reward side of the proposition?


We recently had a chance to test the Buffalo Nfiniti Wireless Router & AP ($125 – $160) and Buffalo’s Nfiniti Wireless Notebook Adapter ($80 – $120). The results were surprising, but consistent with what other testers have found. Not only was the Draft N gear not faster than standard 11g equipment, it was slower — substantially slower in some of our tests.


To its credit, the Nfiniti router sets up easily. we simply unplugged our existing Linksys 11g router — and all the devices connected to it by Ethernet cable, including a cable modem — and plugged in the Buffalo unit, in the same place on a shelf in our office. It automatically connected to the Internet within seconds.


Client devices with up-to-date 11g adapters had no trouble connecting to the Nfiniti router, but one desktop PC equipped with an older Actiontec 11b PCI card adapter could not initially connect — it reported that it couldn’t see any wireless networks within range, even though another PC in the same room had no trouble connecting to the Buffalo router. The 11b adapter later connected when we adjusted wireless settings using the Nfiniti router’s configuration utility, though connectivity remained hit and misses.


The test procedure was simple. We copied a large (557 MB) file from our main PC, attached to the router via Ethernet cable, to a wirelessly connected laptop — and timed the transfer using a stopwatch. In the tests with the Linksys 11g router and a Buffalo 11g notebook adapter, it took three minutes and 47 seconds to copy the file when the notebook was in the same room as the router, 10 minutes and 41 seconds when the notebook was in a room 60 feet away where we typically get poor coverage.


When we installed the Nfiniti router and notebook adapter, the Buffalo ClientManager reported that the link was “100 percent” when the notebook computer was in the same room as the router, and that the connection speed initially was 270 Mbps. However, it almost immediately downgraded the connection speed to 135 Mbps. Windows reported similar but slightly different speeds. All the reported speeds were still substantially faster than any 11g connection, though, so file transfer speeds should have been commensurately faster.


Nevertheless, when we did exactly the same test with the Nfiniti router and notebook adapter — using the same file, the same notebook, the same locations, it took longer to transfer the file: about four minutes and 40 seconds. We queried Buffalo’s tech support group and was told there might be “wide-band interference.” We were instructed to go into the configuration utility — accessible with a Web browser — and to try changing transmission channels and the Control Sideband setting from “higher” to “lower.”


We tried a few recommended configurations. None made any difference to the file transfer test results.


At this point, Buffalo decided it must be a hardware problem and shipped us a new set of Nfiniti equipment. While waiting for it to arrive, we performed the same tests again with the Linksys 11g router and Buffalo 11g notebook adapter and got exactly the same results. When the new Nfiniti equipment arrived and we repeated the test as described, the new unit was even slower.


These results were all the more curious given the other testing we did. One of the supposed benefits of 11n equipment is that it provides enough bandwidth in the wireless network to allow multiple simultaneous high-bit rate transmissions — streaming video, for example. Some pay TV providers are considering Wi-Fi as a feasible medium for distributing video signals to various screens in a home.


We tested this with our existing 11g network by setting up streaming video transmissions between PCs over the wireless network using MPEG2-based video files. With one MPEG2 stream, video quality was good, with little noticeable latency. With two running, one of the streams was constantly interrupted. Video was no longer full motion but more like a slide show. With the Nfiniti Draft N gear in place, we were able to get two streams running, both with acceptable quality video.


Bottom Line:
The test results are at best ambiguous. Even if it turned out that both sets of equipment were faulty, it would be difficult, based on what we saw, to recommend the Nfiniti products. We recommend waiting for fully compliant 802.11n products.