Get Schooled with Video Tutorials for Mac, iPad, iPhone 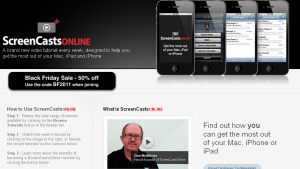 We’re back with another exciting under-the-radar Web tool for you. Now this one is for you Mac users, but hey it’s not just for the Macintosh computer, it’s also for the iPhone or the iPad. Gee, I guess that does include everybody now, right?

This week’s Web tool is called ScreenCastsOnline. Now don’t mix this up with ScreenCast.com — that’s software that lets you create screencasts. This is ScreenCastsOnline.com, and on this site you’ll find a whole slew of videos about how to get more out of your Mac, your iPad your and iPhone.

The guy who creates them all is Don McAllister, the host and founder of ScreenCastsOnline.com. The website was originally developed by Don back in 2005 to help his friends and family get the most out of their Macs. It’s grown to be a pretty decent business where people from all over the world can go and download a new video tutorial each week to help them learn more about their Mac, iPad and iPhone.

Don has created a variety of different categories videos, including accessibility, different Mac applications, presentations and the Lion operating system, to name just a few. The site also offers tutorials on some of the software for the Mac like Garage Band, iDVD, iMovie, iPhoto and so forth.

Now over in the iPhone and iPad category you’ll find videos about the iOS, iPad apps, iPhone apps and also maintenance for these various devices, networking them, and productivity programs and just some hints and tips for them. It appears that most of these are for the computer and not the iPad and iPhone — in fact that category is a little lacking, I’d say, so this site is probably for those of you who are more in the Mac computer realm.

Now the only “catch” to these videos, is that you have to be a member to view them. But you can view the introduction to them to see if you’re willing to join. I’ve got to say that the production values are high, so I can only assume that the content of the screencast is also well-produced, but I can’t guarantee that because you can’t view them unless you become a member.

In order to become a member, it costs $57 for three months. I guess in those three months you’re gonna wanna suck down as many of those videos as you can to make this site worthwhile. There are no monthly charges: the one fee covers the whole three months with nothing else to pay. Extending your membership beyond the first three months is much cheaper than the initial buy-in.

Now there are a lot of videos for you to watch; Don claims there are more than 300, and that makes sense because the most recent video that he cites is video number 322, and it covers Virtualization with Parallels, VMware and VirtualBox. Hmm, maybe I should check this one out — I’m a Mac guy after all.

If you want to learn more, here’s where you go and that’s ScreenCastsOnline.com — video tutorials for the Mac, iPhone and the iPad.