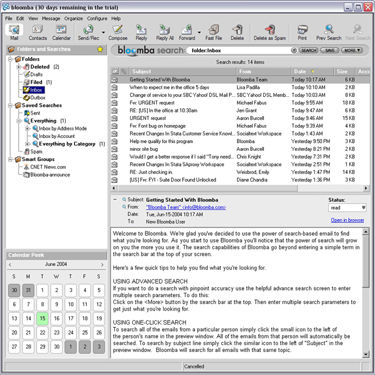 Can you even imagine conducting business today without e-mail? An invaluable tool, e-mail keeps information moving and provides a clutter-free way to save copies of important messages and documents. Trouble is, we quickly amass hundreds, if not thousands of messages. And while they may be neatly tucked away, they’re also virtually impossible to find.

Enter Bloomba, an e-mail client whose claim to fame is its ability to rapidly search stored e-mail messages. Stata Labs offers the Bloomba Professional Edition 2.0.1 for $89.99 for a single license along with Bloomba Personal for $59.95. The Professional Edition offers two additional key features for SMBs: Shared calendaring for group scheduling needs and synch-to-Palm capability.

Standing Out in a Crowded Field
Does the world really need another e-mail client? You could argue that there’s enough choice out there with products such as Incredimail, Pocomail, Opera’s M2, Thunderbird, Eudora and Pegasus. Then there is the very popular Outlook product, which in included in Microsoft’s Office suite.

While Outlook also searches saved messages, Bloomba does it up to eight times faster.

Bloomba installs quickly and easily. A wizard imports all existing mail and mail settings from Outlook, and there’s a fundamental failsafe: you can install Bloomba alongside either Outlook or Eudora without interfering with the operation of the other e-mail client.

Building a Better Bloomba
The software’s latest version 2.0.1 overcomes a few of the hurdles that held back earlier editions. In particular, customers complained about the lack of an address book.

As any good e-mail client should, Bloomba blasts spam. It relies on an integrated version of Stata Labs’ SAproxy Pro 2.0, which is built on the open-source SpamAssassin

But it’s Bloomba’s speedy search function that’s generated buzz for this product — and for good reason. Searching by key word lets you locate documents that have been sitting in remote corners of your hard drive for quite some time.

It’s a quick and convenient way to manage mail without having to devote endless hours organizing messages.

Speaking of Organized
The search function makes e-mail storage vastly more efficient. The only way many people can organize their e-mail right now is by creating folders and subfolders by subject.

That takes time, and it doesn’t always work out as planned: Locating the proper folder later on can take even more time.

Bloomba lets you create folders, but really, why bother? With a fast and accurate search, you can simply store messages in one big ‘saved’ file and let Bloomba do the heavy lifting when it’s time to retrieve the information.

When it comes to search functionality, Bloomba’s most likely rival is Gmail, the e-mail client offered by the search gurus at Google.

Gmail encourages users to never delete anything: It takes multiple clicks to delete a message, and even then, Google says deleted messages remain on the system for an indefinite period of time. The privacy implications here are a bit too Orwellian for some tastes.

Bloomba’s Professional Edition also offers a feature for SMBs that depend on handheld devices. The synch-to-Palm capability lets you keep your calendar appointments and contact information up-to-date as you hit the road.

One final point: Bloomba’s an excellent choice for any SMB concerned about Microsoft. A Yankee Group survey released in January 2004 showed that 43 percent of SMB respondents were worried about relying too heavily on Microsoft products and services. Of that group, 72 percent said that they are actively seeking other vendors to diversify their IT portfolios.

Low cost; easy interface; fast searches and an alternative to Microsoft. It’s not hard to see why Bloomba is building a steady base of happy users.

Adam Stone writes extensively on business and technology issues. He makes his virtual residence at [email protected] and his physical home in Annapolis, Md.