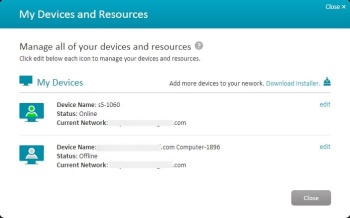 When small businesses need to provide mobile employees, satellite offices or outside contractors with remote access to a corporate network, they typically turn to VPNs, which require special hardware and/or significant configuration effort to provide secure communication over the Internet.

But at the intersection of cloud computing and software-defined networking (SDN) sits an alternative called Pertino. It aims to let small businesses take advantage of secure remote network access that’s much simpler and less expensive than a traditional VPN.

As a nascent service, Pertino still has some rough edges and noteworthy limitations; however we found that it nevertheless makes securely linking far-flung users and their computers extremely quick and easy.

One of those aforementioned limitations is that, for the moment at least, Pertino’s software only supports Windows systems—namely, those running Windows 7 or Windows Server 2008 R2 (with support for the newer Windows 8 and Server 2012 operating systems currently in beta and officially due in April).

Figure 1: Pertino automatically gives names to your network and computers, though the latter are not particularly meaningful.

Pertino’s Mac OS X support enters beta in April and the company expects to debut it in May, while support for smartphone/tablet platforms is also on the drawing board and slated for “later in 2013”. (If you’re still clinging tenaciously to Windows XP, Pertino plans to support that too, but there’s no timetable yet.)

We began our review by visiting Pertino’s website to download and install the software (on desktop running Windows 7 Professional).  You need to create an account to use the Pertino service, but a name and e-mail address are all you need to sign up, and you can set up your account from within the software’s install wizard instead of doing it in advance.

Once we had Pertino’s software up and running on our Windows 7 desktop (there is no configuration required), we logged into Pertino’s site several more times from other computers—in our case, a Windows 8 notebook and Windows Small Business Server 2011 running in a VM—in order to install the software and add those systems to the network.

This is where we first encountered a few of Pertino’s rough edges. To identify your Pertino network the service gives it a rather awkward moniker based on your email address—e.g. johndoe-at-pertino.com, which can’t be changed. Moreover, each system you add to the network automatically gets a derivative name—e.g. johndoe-at-pertino.com Computer 3096.

Fortunately you can change these not-in-any-way-meaningful computer names to something more descriptive via account settings on Pertino’s website.  It would be nice, however, if you could do it from the computer itself, or better yet, when you first add the computers to the network in the first place. (Pertino says both issues will be addressed in future updates.) 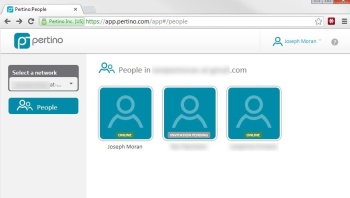 To bring someone else into your Pertino network, you first verify your email address with Pertino, and then you can send out invitations to join your network (invitees must create their own Pertino accounts and install the software).  Conversely, you can remove someone—and all their devices—from your network with a couple of clicks.

We noticed that certain aspects of Pertino’s browser-based management console did not display properly—at all really—in Internet Explorer 10 (on either Windows 8 or Windows 7), even when using Compatibility View. It worked fine in IE 9, as well as with recent versions of Chrome and Firefox.