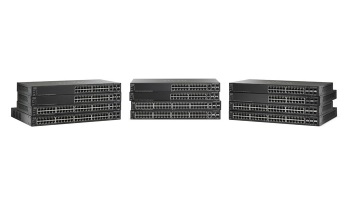 Today’s small businesses increasingly need the kind of computer network power historically reserved for their much larger brethren. But SMBs don’t always have network administrators and help desk experts on staff—the kind of people that run all that complex technology. That’s where Cisco’s new 10 Gigabit Managed Switch, part of the company’s Small Business Series, comes in. The SG500XG-8F8T model offers enterprise-level features in an SMB-friendly package.

Cisco’s new switch offers tremendous flexibility. Businesses can use the eight ports of 10GBase-T copper or, if they’re looking for long-distance fiber connectivity, the eight SFP+ slots. “This means you can cost effectively connect servers, storage devices or desktops over copper to this switch, and you can also connect multiple switches over long distances with the fiber modules,” says Ivor Diedricks, senior product line manager in the enterprise networking group at Cisco. This powerful combination of features makes the new switch a rare find in the SMB market.

According to Diedricks, the new 10 Gigabit switch integrates cleanly with the rest of the SG500X switches that Cisco already has on the market. “In the 500X platform, you have features like Power Over Ethernet Plus and speeds of 10/100 and Gigabit.” Small businesses can combine all this performance for a powerful—but still affordable—solution.

Security plays a primary consideration in the SG500XG-8F8T design. It incorporates robust features such as storm control and IPv6 First-Hop Security. “This product is going to be in the core of the infrastructure, and so it provides rich security capabilities,” says Diedricks. The device includes additional defense mechanisms to identify and thwart deliberate network attacks, and you can even restrict network access during pre-designated times.

It’s a rare small business that wants to overhaul its network every few years to keep up with technology advancements. Diedricks says Cisco saw that as a primary concern and designed the new 10 Gigabit switch accordingly. Future-proofing measures include technologies such as IPv6. “It’s something that’s been talked about for a while,” Diedricks says, adding that while the adoption of IPv6 hasn’t happened as quickly as many in the industry expected, it’s evolution that’s still in progress. “This product integrates very rich support for IPv6, and if you look at this from a multi-year approach, it will carry you forward into the future.”

Having a large, dedicated IT staff is also out of reach for many small businesses. The SG500XG-8F8T includes the kinds of features that make it a good fit in a non-techie organization. Diedricks says the switch includes functionalities designed to make it “simple to deploy, use and configure.” Troubleshooting and management tools are available in a straightforward graphical interface, and the Cisco Discovery Protocol makes it a snap to integrate and configure the new switch into an existing environment.

As the Cisco team talked with small business owners about their needs, Diedricks says one issue that came up repeatedly was consolidation. “One of the things we found is that SMBs would have multiple servers, multiple storage devices, all connected to multiple switches. Basically, the infrastructure has a lot of devices,” Diedricks explains. That translates into complexity, and the solution is to consolidate. “You end up with fewer devices, which improves operational savings,” Diedricks says. A streamlined network requires less power and fewer technology management resources. That allows small businesses to focus on their core business.

Speedy performance means more options, and the SG500XG-8F8T gives small business a lot of them. Interested in deploying server virtualization? This switch can handle it. Want to save energy with PoE+? Yep, it can do that, too. It also supports the speedy new 802.11ac standard for wireless devices. These functionalities have historically been the domain of big business, but Diedricks says, “We’re seeing more of those functions migrating downstream.” Small and midsized firms have discovered the advantages of faster speeds and higher performance, and they want to make them a reality without breaking the bank.

Wrapping the SG500XG-8F8T’s feature set into a price that small business could afford was crucial. “You can pick this product up on the street today for less than $200 a port,” Diedricks says. Shop around for the best deal: an online search revealed prices ranging from $2,800 to $3,500. Still, that’s a price point small organizations hungry for technology horsepower can swallow. SMBs can also rest easy knowing their new hardware is driven by Cisco’s enterprise-class expertise, service, support and quality.