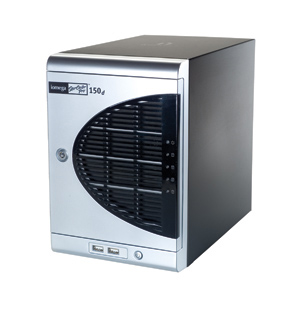 When you want to easily add storage to your businesses network, choosing to go with a NAS device is practically a no-brainer. But from there the decision can get more complicated, because given that NAS products are seemingly a dime a dozen these days, figuring out what kind you need is often a challenge.


Iomega hopes to garner your attention with its new StorCenter Pro NAS 150d, a networked storage device that offers a very good mix of capacity, performance and reliability at a price that even budget-sensitive firms should find easy to swallow.


Hardware Features
The StorCenter Pro NAS 150d comes in two storage capacities — the $799 1 TB model that we used in our testing and a 2 TB model that sells for $1,499. Both units sport four SATA drives (either 250 or 500 GB units) that are hot-swappable. The drives are easy to remove with one hand and, since they plug into a backplane , you don’t need to disconnect power or data cables to free them from the unit.


Just as you would expect from a four-drive system, the NAS 150d supports all three major flavors of (software-based) RAID — 0, (striping) 1 (mirroring) and 5 (striping with parity). The NAS 150d’s the out-of-the-box configuration is RAID 5, since it offers the best mix of capacity, performance and data protection. This default storage mode uses the equivalent of one drive to store redundant parity data, which reduces the available capacity by 25 percent, or in the case of our 1 TB model, to around 686 GB.


Even if you choose the optimal setting for data protection, RAID 1, you still get the performance benefits of RAID 0 since the NAS 150d mirrors striped pairs of drives rather than single ones (this is often referred to as RAID 10). Although we can’t imagine too many instances where you’d want to, you also have the option of using the NAS 150d’s four drives as a single monolithic storage volume.


The NAS 150d’s single network port supports up to Gigabit Ethernet, though to get the most out of it you need to manually enable Jumbo Frame support on the device. You’ll find four USB ports on the NAS150d — two up front and two in the back — to which you can connect either external storage devices like hard/flash memory drives or up to two printers which can be shared via the NAS 150d’s integrated print server.


Setup and Configuration
Although there’s no wizard to walk you through the basic device setup, getting the NAS 150d up and running is still pretty straightforward. You can locate the unit on your network with Iomega’s included Discovery Tool Pro, but the device configuration is done through the 150d’s browser-based interface.


Some NAS devices make setting up access for individuals and groups a chore due to a convoluted interface, but the NAS 150d is better than most in this regard. You can assign users full or read only access to various folders, and no access to anything on the NAS drive is the default configuration for a new person. (While having to explicitly define permissions may be somewhat inconvenient, it’s far better from a security perspective than granting full access and then having to remove specific rights.) You can also organize accounts into groups that you define.


To help manage the use of disk space, the 150d supports storage quotas, but only for each individual’s home folder, not general folders you create for storing marketing or other such files. When you set up a user account, you can specify whether the user has full, read-only, or no access to any ancillary storage devices connected to the 150d via USB. If you don’t want or need to create accounts on the 150d, you have the option of importing existing account data from a Windows NT or 2000/2003 Active Directory domain.


Shared folders that you set up work with Windows clients and also with Mac and Linux clients as well. You can choose the types of access you want when you create individual folders— CIFS (for Windows & Mac OS X), NFS for Linux, or AFP for pre-OS X Mac clients. The 150d also supports FTP access, but only for one folder at a time.


Administrative Features
To keep you informed about device events and status, you can configure the NAS 150d to send e-mail alerts to up to three addresses. This feature, however, doesn’t work with outgoing accounts that require an authenticated login (as many do these days to help control spam). Another oversight is that e-mailed alerts are the only way to view status messages; there’s no way to directly view the device log or save it to disk.


Even with RAID 5 protecting data, prudent people will still want to backup the data elsewhere — either to a USB-connected drive or to a location on the network using the 150d’s built-in backup tool. For backing up client systems, the NAS 150d comes with a five-user license of EMC’s Retrospect Express software.


The NAS 150d performed well when we simulated a failure by removing one of its drives in the middle of a file transfer and while streaming a video file. After a momentary pause, the 150d continued to chug along with both chores, albeit at a more leisurely pace (though the video was still able to play normally). Iomega charges about $300 for spare drives, but doesn’t sell bare drive enclosures since it says that drives customers buy may not meet the company’s reliability standards.


These days there are more NAS products than you can shake a disk at, but what distinguishes the NAS 150d from the pack are its hot-swappable drives and built-in print server, which are not at all a given in this category. These features combined with the relatively low $799 price tag make the Iomega StorCenter Pro NAS 150d a good piece of storage technology for a small business.