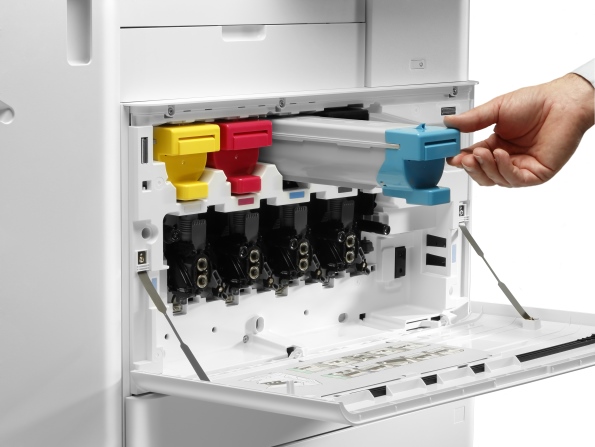 Revamping its A3 multifunction printer (MFP) line, HP’s doing so with the help of Internet of Things (IoT) technologies and the cloud.

First things first; what is A3?

In this case, A3 describes a type of copier or multifunction printer (MFP) that can handle paper sizes of up to 11 inches by 17 inches. This paper size is called “ledger” or “tabloid,” whereas 8.5-inch by 11-inch sheets (A4) are often referred to as “letter” sized.

In companies large and small, it’s not uncommon to see workers walk up to these devices to pick up business letters and memos, legal-sized documents (8.5 inches by 14 inches) and printed diagrams. The A3 copier market is big—$55 billion according to HP—and it’s one HP aims to disrupt with a wide array of new product and service introductions in the coming months.

A Flood of New MFPs

HP has an ambitious plan to release 16 new A3 MFPs by May 2017. This includes three new PageWide printers and 13 new LaserJets. When all is said and done, a staggering total of 54 different SKUs (stock keeping units will be available by spring 2017.

Business technology buyers are already familiar with the venerable LaserJet brand, and they can expect a slew of color and monochrome A3 MFPs that not only print faster and more efficiently, but also slash maintenance costs (more on that later). PageWide printers are a more recent innovation.

Inspired by HP’s large-scale commercial printers, the print head of a PageWide MFP spans the entire width of the paper, unlike conventional inkjets with print heads that sweep back-and-forth across the page. With fewer parts that may wind up failing—just three claims HP—and a simplified paper path, this design improves print speeds and enables high-quality printing at low cost, said David Laing, worldwide vice president of contractual channels at HP Inc., during a recent press event.

A PageWide MFP “consumes significantly less energy and since it has fewer components, there’s less packaging waste,” he said. “The only thing moving across the machine is the paper.”

Updated hardware is just part of HP’s plan to shake up the A3 printing market. The other aspect involves cloud-based services that turn the IoT’s potential into reality.

The system will allow “predictive diagnosis to solve problems ahead of times,” he added. It continually monitors customers’ printing hardware and analyzes a range of device health indicators to predict whether a component will fail; and when it detects trouble, the Smart Device service kicks off the parts-servicing process.

Compatible with the company’s FutureSmart upgradable firmware technology (available since 2012), the service will get smarter over time. Laing estimates it will “improve service costs by 30 percent for customers.” As the machine-learning engine that powers the HP Smart Device Services grows more sophisticated—enough to optimize parts-supply chains and partner-repair fleets—he estimates that repair costs can drop by up to 50 percent.

HP’s A3 ambitions got a big boost earlier this month when the company announced it is acquiring Samsung’s printer business for $1.2 billion, the largest print acquisition in the company’s history. In addition to its own A3 printer portfolio, Samsung’s printer division is home to 1,300 engineers and researchers, along with 6,500 printing patents that will transfer to HP.

[Learn how to: Slash Your Small Business Printing Costs]

While Samsung is better known for its consumer electronics and best-selling Galaxy line of Android smartphones, the company made a name for itself in the color and monochrome workgroup laser printer categories, racking up multiple industry awards over the years. “The acquisition of Samsung’s printer business allows us to deliver print innovation and create entirely new business opportunities with far better efficiency, security, and economics for customers,” said Dion Weisler, president and CEO of HP, in a Sept. 12 announcement.