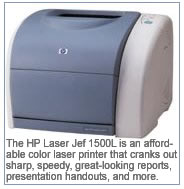 Is it too early to nominate the hardware trend of the year? AMD hopes it’ll be 64-bit processing, but we suspect that’s a bit premature. It might be LCD monitors replacing CRTs or multifunction printer/scanner/copiers replacing plain inkjet printers, but those trends were well underway before 2003. And wireless networking was last year’s news.


No, we suspect the history books will honor this year for bringing color laser printers down to price levels where — like flat-panel monitors before them — they move from win-the-lottery luxuries to splurge-but-worth-it consideration. Two weeks ago, we reviewed Minolta-QMS’ Magicolor 2300W, a $699 temptation for small offices formerly planning to settle for a color inkjet printer. And now the company many folks see as practically synonymous with laser printing, HP, has introduced the Color LaserJet 1500L — a color laser with the HP logo priced at $799.


We pause here for cynics to wisecrack that the logo is all you get for the extra $100 over the Minolta-QMS brand — which is hardly a no-name but certainly less of a household name than HP. In some ways, you can see the cynics’ point: While both are rated at 16 pages per minute for black text and 4 ppm for color printing, the 1500L proved slightly slower in most of our tests than the 2300W (though it was faster when printing Adobe Acrobat files).


Give or take a few more slightlys, it holds less paper, takes more desk space, makes more noise, and has less onboard memory and a smaller monthly duty cycle. And the Color LaserJet 1500L has just one USB 2.0 port by way of interface; the Magicolor has both USB and parallel ports.


On the other hand, the HP’s color toner cartridges cost less (saving some $60 per set of cyan, magenta, and yellow replacements, though Minolta-QMS has the better deal on the less frequent chore of replacing the imaging drum). And while the 1500L’s built-in paper tray holds 125 sheets versus its rival’s 200, HP offers the option of less frequent refills with a 250-sheet second tray for 375 pages total (standard on the otherwise identical Color LaserJet 1500 model, which should sell for around $999). The Magicolor has an automatic duplexing option, but its paper capacity can’t be expanded.


Frankly, what’s most important bottom-line-wise is that both are compact, affordable color lasers that crank out sharp, speedy, great-looking reports, presentation handouts, or correspondence — with much lower costs per page than a color inkjet, even before you factor in the latter’s need for special coated paper to combat fuzziness or smudging. If this be a hardware trend, make the most of it.

At $799, the Color LaserJet 1500L is $100 cheaper than the base model of the Color LaserJet 2500 series we tested last November. Sharp-eyed shoppers will notice that it has just the abovementioned USB port, while its ancestor had both USB and parallel; X-ray inspectors will discover that it has just 16MB of nonexpendable, onboard buffer memory, instead of 64MB expandable to 256MB.


That makes it even less suitable for sharing by a small office staff or corporate workgroup, although you can always plug in an external print server (or just leave your PC on to serve the same function for networked coworkers). Both the 1500 and 2500 series share the same beige-and-blue case with 18 by 19-inch desktop footprint — it stands 13 inches high and weighs about 48 pounds. By contrast, the Magicolor 2300W takes a couple of inches less desk space but is taller — and 14 pounds heavier to move around.


Spin the Bottles
As with the Color LaserJet 2500, setup involves opening the printer’s top lid, then opening a quintet of plastic bags — inserting first the imaging drum, a bulky cartridge that drops smoothly into place toward the front of the printer, and then the cyan, magenta, yellow, and black toner cartridges. The latter are compact cylinders that drop easily into slots marked with arrows and initials; after installing each one, you reclose the lid and press a “rotate carousel” button to spin the next slot into position.


Indicator LEDs on the top panel tell you when each cartridge and the drum need replacing, in case you haven’t been paying attention to or don’t install the status-utility software that accompanies the driver; you can also press two top-panel buttons simultaneously to print a handy pair of configuration pages with a precise printing history and consumables-left countdown. The printer is rated for a monthly duty-cycle maximum of 30,000 pages.


Those thousands of pages will require plenty of refills of the 125-sheet paper tray, which folds down from the front of the printer and has handy sliding guides to center and hold pages in place. Documents normally appear face down (collated) on top of the unit — we think there’s room for about 100 sheets, though HP says 125 — but a handy flap at the back folds down to provide a straight-through path for envelopes or special stock.


As we noticed with the 2500 model, the Color LaserJet 1500L makes a noticeable amount of whirring and clicking noise while printing, especially for color pages which take four passes through the print engine, so you might find it too much of a racket for desktop placement. On the positive side, it doesn’t grow as warm as the Magicolor 2300W did in our tests — at 400 watts, it takes less than half as much electricity.


The latter test took five seconds less on the Minolta-QMS. We say “Big deal” to that, but the Color LaserJet trailed by a bigger margin when we printed our pair of six-page (six-slide) PowerPoint handouts: The slide show with a plain white background took 3 minutes and 34 seconds (half again the Magicolor’s time), while half a dozen slides with a dark blue background kept us waiting for 5 minutes and 21 seconds.


Again, however, the HP narrowly won the mixed-text-and-graphics marathon of our Adobe Acrobat PDF print tests: Six pages appeared in just under two minutes, while a 55-page document took 15 and a half minutes.


Resolution-wise, the 1500L has a 600 by 600-dpi print engine. Real-world-wise, we found its output indistinguishable from the 1,200 by 600-dpi Minolta-QMS machine’s, even for 8 by 10-inch digital-camera prints — no photo looks fabulous on cheap copier paper, HP’s advertised PhotoRET 2400 resolution enhancement notwithstanding, but our images (which took just under 90 seconds apiece) were bright and clear. Solid-color charts showed no trace of banding, and text was, well, laser-sharp no matter what the font size.


If you’re expecting us to pick a winner between the Magicolor 2300W and Color LaserJet 1500L, we’re not going to — frankly, the $100 price difference isn’t enough for us to get worked up over quieter operation and a larger buffer versus expandable input trays and lower cartridge and electricity costs. We think either printer would be a terrific minor splurge, yielding major benefits in professional-looking output, for a small-office czar or home-office head honcho. And while we’ve given thumbs up to heavy-duty, $1,000-plus office inkjet printers before, we think this is the year of the color laser.