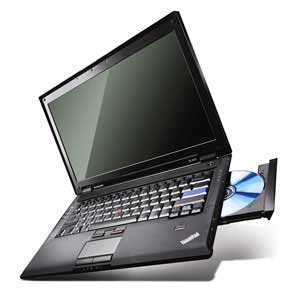 If you run a small or mid-sized business, you’re probably on the go and always looking for the chance to squeeze in a few more hours of work. That means, you’re a perfect candidate for a notebook computer.


In a move designed to zero in on the SMB-notebook love connection, Lenovo today introduced the SL ThinkPad line, which the company says was designed specifically for smaller companies. The SL300, SL400 and SL500 are designed to accommodate a mobile work style, add a touch of multimedia sizzle and sport stylish good looks.


To reinforce notebooks’ big appeal to small business, Sune points to IDC data that predicts that in 2009 31 percent of all notebook sales will be made to small businesses. While that’s impressive, it doesn’t stop there. Sune said SMBs are also “the fastest growth area” for notebook sales, out-pacing sales to large enterprises.


“That got our attention, and we decided to more directly address this segment.” In the U.S., IDC predicts that the number of notebooks used by SMBs will to grow from 7.5 million notebook PCs in 2007 to 11.6 million in 2011.

You Want That to Go?

You could argue that M in SMB stands for “mobile.” Sune said Lenovo designed the notebooks to meet the way small businesses work, which includes in the office, at home or maybe at a coffee shop. To address on-the-go businesses, the SL notebooks offer several flavors of wireless connectivity.


In addition to supporting Wi-Fi, Bluetooth and WiMax, the SL notebooks also feature an option ($25, according to Sune) for a built-in connector for high-speed mobile broadband. He said Lenovo is partnering with AT&T to offer optimized mobile broadband service.


While AT&T’s reputation took a bit of public relation hit due to its notoriously slow Internet access speed on the iPhone, Sune pointed out the SL notebooks support AT&T’s HSPA/GSM network, not the much-maligned Edge network. Lenovo didn’t have a lot of options for partners in this country. Sune said At&T is only provider to offer GSM in the U.S. He added that they will have multiple mobile broadband partners worldwide.

While the SL notebooks are built to be business-savvy, they also pack a multimedia punch and the company seeks style points for the line’s attractive looks. “Buyers in the 1-99 employees category are similar to pure consumers,” Sune said. “They are interested in an eye-catching design.” To meet that interest, the ThinkPad SL series features a glossy-black top cover, which is a first for the ThinkPad line, he said.


On the multimedia side, the SL line comes with speakers, microphones and an optional Web cam that provides Internet voice and video conferencing. If you want to watch movies or other video content in high-definition, the SL lines supports HDMI/VGA. To help you create multimedia content, the SL line also includes Roxio Creator for Small Business.


The SL notebooks offer up to 320GB hard drives to help accommodate video, photos and music. It also has a 1394 port to allow you to connect external storage devices.


It’s no secret that small businesses often have lean IT resources. In an attempt to provide a layer of data protection and security, Lenovo also announced ThinkPlus Secure Business. Among other services, it offers online data backup. You get 5GB of backup space at no charge or can expand to 50GB for $149 (for a year) or $439 for three years.

While features are, of course, important, price is paramount, according to Sune, who described small businesses as “the most price sensitive segment of the notebook market.” The SL line is “cost-optimized first, but we had to be careful about tradeoffs.”


For example, Sune said, the SL lines does not incorporate a proprietary docking station (which in effect turns your notebook into a desktop PC). However, small businesses can get some of that functionality through port replicators.


The SL notebooks incorporate Lenovo’s Active Protection System, which is designed to sense sudden movement. It then locks the hard drive heads to prevent damage to drive.


All three SL notebooks can accommodate various Intel Core 2 Duo processors and will soon be available with Intel Centrino 2 processor (which were released this week).